Life’s problems should not draw us to violence, funeral of man (24) hears 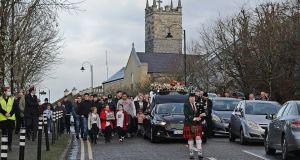 A piper leads a cortege in Knock, Co Mayo as the funeral Mass of Michael McDonagh (24) took place in the town on Saturday. Photograph: Conor McKeown.

Life is often unbearably difficult but violence is not the answer to our problems, the funeral of a young man killed in Co Mayo this week has heard.

“While life is tough we should never be drawn to violence,” Fr Richard Gibbons told the funeral Mass of Michael McDonagh (24) at the Church of St John the Baptist in Knock on Saturday.

“Our understanding of life comes from Jesus, the son of God, and the fact that he wants us to live the fullest life that we can, joyfully, hopefully and not despairing. Sometimes life can get us down. It can send us on different paths and wrong paths but there’s always hope.”

Mr McDonagh died after an incident at a house in Swinford, Co Mayo on Monday. A 31-year-old man has been arrested, charged with his murder and remanded in custody.

The deceased grew up in Knock and, in his childhood years, was an altar boy in Knock Parish. He was one of an extended family of 15, with 11 sisters and three brothers.

The Mass was attended by a small group of mourners, including the dead man’s foster parents, Winnie and Bernie, in keeping with Covid-19 restrictions.

A significant group of mourners gathered outside the church and followed the hearse as its made its way to the local cemetery. The cortege, which numbered up to 200 people, was led by a lone piper and gardaí maintained a modest but discreet presence outside as the church and graveyard.