‘Cautious but effective’ Helen McEntee set to have her mettle tested

Some see her as a future FG leader. She will need to survive tricky justice portfolio first 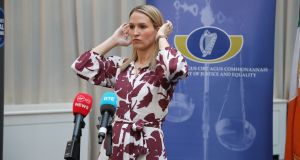 There are some parallels between Minister for Justice Helen McEntee’s current difficulties and those faced by Heather Humphreys soon after her first appointment as a minister for arts in 2014.

Humphreys found herself in a political vortex over a decision to appoint a Donegal supermarket owner to the board of the Irish Museum of Modern Art, to ease his passage in a byelection for the “cultural” panel of the Seanad.

The crisis was not of Humphreys’s making but she had to handle the fallout. She did not do well. Some of her interviews were best viewed from behind a couch. Humphreys made sure it never happened again.

Here is another relatively new Minister embroiled in a controversy that many believe was not of her own making. In summary, she recommended Séamus Woulfe to become a judge of the Supreme Court after departing from a long-standing tradition of sharing the names of all contenders with her most senior Government colleagues.

For people looking in from the outside, it stretched credulity that a brand new Minister would do this. The Opposition in the Dáil bayed the whole shebang was “horse-trading”.

Unlike Humphreys, instead of being thrown in the deep end, McEntee was shielded from direct Opposition and media questions for a week. The wisdom of that was summarised in one wounding word created by Miriam Lord: McAbsEntee. It did not work.

In a way it reflected public perceptions of McEntee as understated, publicly reticent and reluctant to do anything “on the fly”.

That caution has been evident since her appointment to justice, a role usually held by highly experienced politicians. Her learning curve has been vertiginous. After hemming and hawing, she introduced legislation imposing criminal fines for house parties in October. The Act has not yet commenced and time will tell if it’s real or a populist gimmick.

The other perception is that she is in Cabinet largely because she is a FOL (a friend of Leo’s and ever present in selfies from various concerts).

That perception is not borne out by her track record.

She is regarded as having done exceptionally well in another demanding portfolio, as minister of state for European affairs.

There she displayed similar caution when first appointed. Over three years, however, she won respect for her understanding of the issues, her work rate and her ability to network widely across Europe with politicians and officials. She might not be demonstrative but the private view is of an effective and decent politician in person.

McEntee (34) comes from a well-known family, steeped in GAA and politics, from Castletown, Co Meath. She has a degree in economics from DCU and a master’s in communications. Her father, Shane, was a Fine Gael TD and she worked for him from 2010 until his death by suicide three years later. One of her own coping mechanisms, she said in a 2016 interview, was to ignore negative references and comments.

There is steel under the quiet demeanour. She is very “territorial” in Meath East and does not engage in the the same cross-party camaraderie you see elsewhere. That has extended to a salty relationship with her Fine Gael colleague Regina Doherty. In a 2017 Irish Times interview, Doherty said McEntee would “walk past me in the corridor and wouldn’t even blink her eyes”. McEntee responded they were “utterly inappropriate comments”.

There are some who see her as a potential party leader. She certainly has the smarts. but the making or breaking, of her will be how she handles this large, problematic portfolio over the next few years.