Gardaí ‘carrying out inquiries’ after hundreds attend funeral in Roscommon 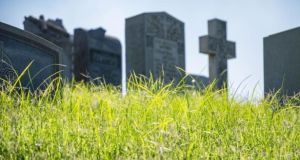 A video of a funeral in Roscommon town shows hundreds of people in attendance, with little adherence to public health advice. Photograph: iStock

Gardaí are “carrying out inquiries” after footage emerged of hundreds of people attending a funeral in Co Roscommon in breach of Level 5 lockdown measures restricting the number of mourners to 25.

A video of a funeral at St Coman’s Cemetery in Roscommon town on Friday, November 6th, shows hundreds of people in attendance, with little adherence to public health advice. Very few people were social distancing or wearing masks.

Many mourners were tightly packed around the coffin and took turns to carry it towards the graveside, resulting in large numbers of people being in close contact with each other.

Video of the event, which was attended mainly by members of the Traveller community, emerged after public health experts warned of outbreaks of Covid-19 arising from funerals and after a priest in Co Cavan was given a “last warning” by gardaí, who told him he was in breach of regulations by leaving his church doors open while saying Mass.

Garda Headquarters said they were aware of the crowd gathering on the day and are examining what happened.

“An Garda Síochána attempted to engage with the family in advance of the funeral to explain guidelines surrounding funerals,” a statement said. “An Garda Síochána continues to carry out inquiries into this event.”

Martin Collins of Pavee Point, the Traveller and Roma centre, said while funerals were a very important part of Traveller culture, “some parts of our culture have to take a back seat” during the pandemic.

He said Pavee Point had repeatedly encouraged people to adhere to the public health guidelines, including not gathering in large numbers, even for funerals. He said he was “reinforcing that message now”.

Mr Collins said many people from the Traveller community were living in poor conditions, some with no running water or electricity, and were unable to adhere to public health measures. He was aware of numerous clusters of Covid-19 in his community, including one recent outbreak in north Dublin involving about 40 cases.

“People in our community have died from Covid-19 and I think Traveller people need to know that, need to hear that,” he said.

However, Travellers were not the only group in society who had breached the guidelines, he said.

“We’ve seen settled people and those in the higher echelons of society, Supreme Court judges, EU commissioners and Government Ministers breaking the guidelines.”

Mr Collins said people in the Traveller community may feel under pressure to go to funerals and once there many go out of their way to make sure they were seen by the bereaved family.

Garda Headquarters added that since the start of the pandemic, the force had “engaged extensively with Traveller community representative groups in relation to the public health guidelines”.

The Garda had also produced an educational joint video with a Traveller representative group – Traveller Mediation Service – and this has been distributed via its network and also on Garda digital and social media channels, it said.

One local source said because people in Roscommon were mostly adhering to the lockdown conditions, it was difficult to determine what local reaction had been to the large attendance at the funeral.

“I know one person who happened to be visiting a family grave at the time and they were pretty shocked. They said to me there was more people there than you’d see on ‘cemetery Sunday’,” the source said of the annual blessing of the graves at the cemetery.

She added most of the people did not appear to be from the local area and had instead travelled from various parts of the country.