‘My grandfather was killed by the IRA on Bloody Sunday morning’ 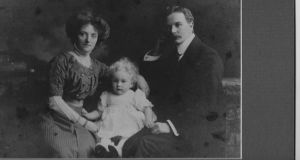 On Bloody Sunday morning 1920, 10-year-old Percival Smith answered the door to what he anticipated was a routine call at his father’s boarding house in 117 Morehampton Road, Donnybrook.

As he did so, a large number of IRA volunteers rushed past the boy. Percival’s father Thomas Smith, the landlord, asked to be given time to get dressed. He, along with Captain Donald Lewis McClean were taken into the sitting room of the boarding house and shot dead.

Later Smith’s wife Anna recalled the events of Bloody Sunday when she gave evidence at the inquest into her husband’s death.

“I saw some men coming up the stairs, who appeared to number about twenty, with revolvers in their hands. They then told me to put my hands up and my husband came out on the landing and asked for a little time to put on some clothes, which they granted. I then asked if I could go into my baby in the next room and they pushed me roughly into it. I then heard about eight shots.”

After his father’s killing, Percival Smith’s mother remarried. He emigrated to Britain in 1947 and settled first in Wales and then in England.

His son Des Smith, who lives in Spain, said his father, who died in 1984, never spoke about the events of Bloody Sunday.

“All of my life he would never speak about it. He never told us about it. I found out about it by reading it a book. I then worked out that the 10-year-old boy was my father,” he said.

“He definitely was very traumatised which is why he never spoke about it. He had, dare I say it, a very strong dislike of the Irish particularly the southern Irish. He liked to think of himself as English.”

Thomas Smith had a daughter Celeste who died just before her 101st birthday in The Glebe nursing home, Kilternan, in 2015. She may well have been the last surviving witness to the events of Bloody Sunday morning.

In her latter years she spoke about it recalling the terrible sound of banging and the shots as her father was killed. She was buried beside him in Mount Jerome cemetery.

Des Smith says his family has made its peace with Ireland and he now has an Irish passport. He believes his grandfather was “collatoral damage” in the brutal intelligence war between the IRA and the British authorities in Ireland.

He served in the RAF for 12 years rising to the rank of flight lieutenant. He was a member of a RAF Vulcan crew which was part of the UK nuclear deterrent during the 1960s and 1970s.

He spent much of his time at the end of a runway ready to scramble in the event of a nuclear attack.

As a former serviceman, he accepts that, while his father was an innocent victim, the others were combatants.

There was precious little sympathy for those killed on Bloody Sunday morning even from their own side with the British prime minister David Lloyd George opining that they “got what they deserved, beaten by counterjumpers”. The chief secretary to Ireland, Sir Hamar Greenwood remarked that they should have taken greater precautions.

“They were in the pay of the British army, doing the job they [were] expected to do and it was risky,” Mr Smith said.

“Unfortunately it is a sad fact of war that people get killed. I have sympathy with those who were killed, but they took a risk.”