Lidl looting does not represent the ‘decent people’ of Tallaght 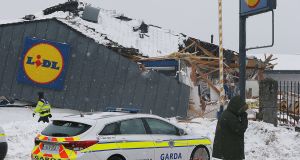 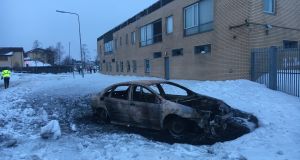 One of the burnt out cars in Jobstown on Saturday. Photograph: Jack Power

On Saturday locals in Tallaght filed down Fortunestown Lane, each stopping to stare at the wrecked Lidl store, its roof knocked in by a stolen mechanical digger the previous night.

Caitriona O’Driscoll, one resident living down the road from the store, said the criminal damage and looting did not “represent any of the decent people in Tallaght”.

Ms O’Driscoll, who grew up in the area, said there was a “minority” who gave the entire community a bad name.

Lidl is the main supermarket in the area, the other options being a Dunnes Stores in Citywest, and smaller corner shops in Jobstown. The loss of the store, even temporarily, will be a major inconvenience, particularly for older people, Ms O’Driscoll said. “It’s the decent people now that are going to suffer,” she said.

The trouble started around 5pm on Friday, when a stolen mechanical digger knocked-in the roof of the Lidl store, and a large number of people began to loot from the shop. The bucket of the digger was then used to try and break open a steel safe from the store.

Robert Robinson was another local who stopped to look at the damage caused to the store, describing it as “sickening.”

The 25-year old student, said the actions of a small group fed into people’s assumptions that the entire area was a “kip”, but he said it was “only a handful of people” causing trouble.

Several residents expressed fear that viral news of the damage and looting would scare other businesses from setting up in the area.

Last year Lidl submitted an application for planning permission on the Fortunestown Lane site to build a larger two storey store, to replace the current shop — an investment several locals feared could now be under threat.

Paula Lynch, who lives in Ard Mor Court, an estate beside the Lidl store, said a small criminal element was “blighting” the community, and she was “disgusted” by the incident.

Shortly before 8pm, while gardaí­ were still responding to the incident at Lidl, a number of men used a con saw to tear through the shutters of a nearby Centra, on Kiltalown Way, Jobstown.

The cigarette machine and cash register in the store were broken, and damage was done to the interior of the store.

By Saturday evening the store had installed new shutters, and a security guard remained inside the closed store overnight as a safety precaution.

A representative for the store said damage done to the inside of the small shop was “minimal”, in part due to the quick response from gardaí­.

Separately six vehicles were set on fire in Jobstown on Friday night, and there were delays removing the burnt out cars the following day due to the heavy snow. Three of the cars were burnt out on the Fortunestown Road, one of the main roads in the estate, next to where the controversial Jobstown protest against water charges took place in November 2014.