Tomorrow will ‘not be a normal Monday in many areas’, public warned 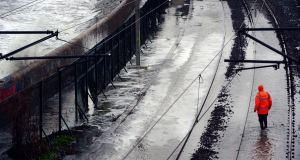 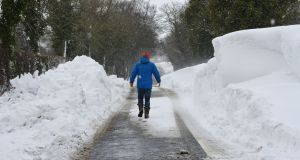 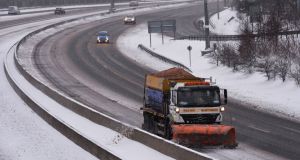 Clearing a path on the M50 near Ballymount. Photograph: Alan Betson / The Irish Times 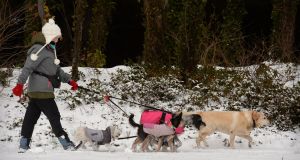 Water rationing could be rolled out across the State this week as Irish Water struggles to cope with a perfect storm of increased demand and widespread mains leaks caused by pipes burst during four days of snow and ice.

While the worst of the Storm Emma has passed, an Orange weather alert remains in place in many parts of State as hazardous conditions persist with a risk of localised flooding due to heavy rain and thawing snow.

Its chairman Sean Hogan said that tomorrow would “not be a normal Monday in many areas” and called on employers and employees to consider staggering opening and start times to reduce peak volumes of commuter traffic as well as options for working from home.

While thaws have improved some road conditions, caution is still advised for motorists. Secondary routes and hills are still impassable in many places. In particular, the potential volumes of traffic on the M7 present significant challenges with only one lane open on Sunday between Junction 8 and Junction 10 at Naas.

Public transport is resuming, with most services getting back to scheduled operations on Sunday, although services in the south-east will continue to be restricted. Intending service users should check in with operators before starting journeys.

Irish Water has expressed concern over is the increase in demand across the country which it said was putting severe pressure on water treatment plants.

Its chief executive Jerry Grant said the greater Dublin area recorded an increase in demand of more than 10 per cent over the weekend and, although water treatment plants have been working at peak output, storage was depleted by 30 million litres.

Similar pressures issues have also occurred elsewhere across the State and Mr Grant warned that if the situation was not reversed it would lead to pressure reductions and the possibility of night-time restrictions.

Householders have once more been urged to conserve water. People have also been asked to visit premises which have been unattended over recent days to check for running taps and burst pipes.

Concern has also been raised about flooding. Although river levels have been relatively low, a quick thaw coupled with heavy rainfall could result in a surge in water levels without warning.

The Department of Education said earlier that schools will reopen wherever possible on Monday; individual schools and colleges will decide based on their circumstances and local conditions.

General health services, including all outpatients and day surgeries, are expected to resume on Monday, apart from some areas still experiencing travel difficulties. All non-elective surgeries are cancelled on Monday.

Met Éireann said tomorrow’s weather will be brighter than today with a lot of cloud and sunny spells and a gradual overall rise in temperatures going through the week with remaining deposits of snow continuing to melt.

Westerly winds returning during the week, which will keep temperatures up but frost likely at night through clear skies.

The main flood risk is in small steep catchments rather than around the major rivers, according to the Office of Public Works. Drains and gullies may also be blocked by snow and debris, and local authorities are monitoring for local flooding in towns and cities.

ESB’s latest update predicted 6,000 would be without power overnight, with the majority in south Co Wexford. ESB Networks hopes to reconnect all customers by Sunday evening.

It has restored power to 141,500 customers since the beginning of the storm, it said.

On public transport,Irish Rail intends to operate to timetable, but it advises passengers to check its website for details of services and delays. Its Dart service is operating across Dublin.

The Red Line is running between The Point and Red Cow. There are no services between Red Cow and Tallaght/Saggart. Connolly Luas stop remains closed.

Again, a frequency of 30 minutes will operate.

The closed sections of Red and Green Line will be opened following inspection of tracks and platforms, Transdev said.

All Luas Park and Rides are closed.

Dublin Bus said it is operating on main roads but not on some local roads.

Bus Éireann said the majority of services are starting to return to normal this morning, albeit some with delays and curtailments, and some subject to ongoing route assessment.

It said some of the key large regional routes into the east - including those serving hospitals, colleges and Dublin Airport and city services - have commenced this morning.

Expressway intercity services are operating, with some delays.

Airports are open, but passengers are advised to check with airlines, as some flights are still subject to delays and cancellations.

Taoiseach Leo Varadkar said on Saturday that, although the overall situation was slowly improving, “we don’t wish to lull people into a false sense of security”, adding, “Road services are treacherous in many areas, due to ice and lying snow.”

But Mr Varadkar added that the Government was liaising with suppliers “to ensure there is food on the shelves”, amid reports of shortages of milk and other products, and that local authorities had 3,000 people on the ground this weekend to get things back to normal as soon as possible. Almost 750 Defence Forces troops have also been deployed across the country to help.

In Galway there had been fears of flooding in the docks, Spanish Arch and Claddagh area if a thaw added to high spring tides and a storm surge. The city council said its crews were on site from 5am and that roads in and around the harbour have reopened.

A high tide at 7am led to the south channel of the River Lee overflowing its banks and flooding nearby streets, but there was no damage to property.

Cork County Council has begun putting up mountable flood protection barriers in both Mallow and Fermoy in anticipation of snow melt adding significantly to flows in the Blackwater. Emergency services are on standby.

Council management have mobilised 11 snow ploughs, two graders and 17 additional spreaders to spread 300 tonnes of salt. The council has warned of drifts in some areas.