Rory Harrison is accused of perverting the course of justice 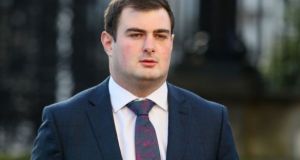 A police officer has denied trying to catch a co-accused of Ireland and Ulster rugby players Paddy Jackson and Stuart Olding “off-guard” while investigating an allegation of rape against the two men.

Rory Harrison is accused of perverting the course of justice and destroying evidence in relation to the alleged rape.

He gave a voluntary witness statement to police on June 30th, 2016, two days after the incident in which he detailed bringing the complainant home from the house-party that night.

Four months later, on October 4th, police brought him in for interview under caution and accused him of “sanitising” his first statement and leaving out key details to protect his friends.

On Wednesday morning one of the interviewing officers agreed with defence counsel, Gavan Duffy QC, that Mr Harrison was not told he was going to be interviewed under caution before the October interview.

Counsel put it to him this was a “conscious decision to catch him off guard.” The officer denied this. “Absolutely not, I have no evidence of that.”

He agreed with counsel Mr Harrison didn’t know he was going to be interviewed under caution and arrived without his solicitor. He had to wait four hours for his solicitor to arrive once he found out.

The detective told the court he had been instructed by a senior officer not to give Mr Harrison a copy of his witness statement from the June interview and that the accused was working entirely off memory.

During the cautioned interview detectives asked Mr Harrison about a phone call he made to his co-accused Blane McIlroy on June 30th, after he had given his initial witness statement.

The jury has previously heard Mr Harrison called his friend to give him a “heads up” that Mr Jackson and Mr Olding had been taken in for questioning because “a girl from Monday might have cried rape”.

During the cautioned interview Mr Harrison was asked how he knew the alleged crime was sexual in nature when he made this phone call. Officers put it to him he was initially only told the they were investigating an assault.

Today, Mr Harrison’s counsel put it to the officer it would have been “blindly obvious” to conclude it was either rape or sexual assault especially considering a text he received from the complainant about not consenting to what happened that night.

The detective disagreed it would have been obvious.

The trial continues this afternoon before Judge Patricia Smyth and a jury of eight men and three woman.