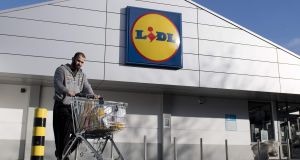 Supermarket chain Lidl has said it plans to reduce the sugar and salt content of hundreds of its own-brand products before the end of next year in an attempt to address mounting concerns over childhood obesity and unhealthy diets. Photograph: Justin Tallis/AFP/Getty Images.

Supermarket chain Lidl has said it plans to reduce the sugar and salt content of hundreds of its own-brand products before the end of next year in an attempt to address mounting concerns over childhood obesity and unhealthy diets.

Some 850 of Lidl’s own-brand products are being assessed with a view to reducing their sugar content by 20 per cent and their salt content in line with international guidelines.

The sugar cuts will affect around 350 products most of which are popular among children, including breakfast cereals, spreads, sauces, and sweets. The salt reductions focus on 500 foods such as ready meals, soups, pizzas, crisps, cakes and meat products.

The move comes as more retailers and producers move to make their products less harmful. Last year Kelloggs announced it was reducing the sugar levels in some of the most popular children’s breakfast cereals on the market by up to 40 per cent.

About 1.2kg of sugar was removed annually from children’s diets between 2005 and 2017, according to a study on the State’s food and drink sector published earlier this week by lobby group Ibec.

“The food and retail industry can make a positive contribution to the prevention of obesity, so it’s important we work in partnership to achieve a reduction in the amount fat, salt and sugar in foods eaten regularly by consumers,” Minister for Health, Simon Harris said in response to the move. “This is something I hope others will replicate.”