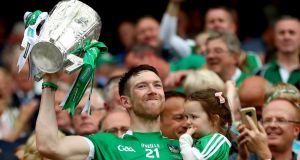 All-Ireland senior hurling champions Limerick were crowned the county’s People of the Year at a ceremony on Thursday.

The Limerick hurlers ended a 45-year drought when they defeated Galway to claim the championship at Croke Park in August. Team manager John Kiely, who was accompanied by players Richie English, Paul Browne and Nicky Quaid, paid tribute to the other nominees for the award.

“Having listened to the stories of all the other award recipients we are humbled to be even considered on the same page as these people,” he said. “Their stories are so incredible, powerfully, inspiring, and laden with courage and determination.”

O’Riordan, who fronted The Cranberries, was inducted into the Limerick Hall of Fame, an initiative announced at the awards. She died suddenly in a London hotel in January 2018. Her mother, Eileen said: “It’s great, it’s marvelous, it’s a great honour. Her music will always be there.”

Mayor of Limerick James Collins, who received a Special Achievement Award on behalf of Ms Phelan, said she was “an inspiration” to everyone.

“She fought for disclosure. Her strength of character exposed glaring weaknesses in our system with consequences for women,” he said.