Driving permits will need replaced by Irish equivalent if no withdrawal accord, RSA warns 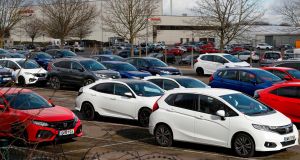 The average time to swap a UK driving licence for its Irish equivalent is about 17 days. Photograph: Adrian Dennis/AFP/Getty

Holders of UK driving licences resident in Ireland will be forced to trade them in for their Irish equivalent as they will become defunct in the event of a no-deal Brexit, the Road Safety Authority (RSA) has warned.

The RSA is advising such drivers to make arrangements to swap their licences before March 29th, when the UK is due to leave the European Union.

Under current arrangements UK licence holders can make such an exchange and preserve all the different categories and permissions conferred by their existing permit.

Holidaymakers and those making short visits to Ireland will be able to use their UK licence.

There are some limited exceptions to what are known as national licence categories, the NDLS said. These cannot be transferred to an Irish licence. The NDLS said it had no estimate of how many people resident in the State were driving on UK licences. “Since some of these licences are valid to age 60 it would be extremely difficult to gauge whether a particular licence holder lives here or not.”

A spokesman said the average time to swap a UK licence for its Irish equivalent is about 17 days, although in some instances they can be turned around in 10 days.

Holders of British licences who live in Ireland expressed dismay at the news. Craig Tait, who has lived and worked in Ireland for 15 years, told The Irish Times he has for all that time driven Irish-registered cars on his UK licence.

“The news that the use of my UK driving licence, which I have held for 20 years, will no longer be allowed for use post a hard Brexit is very concerning. I have to drive each day to work due to a lack of public transport to Dublin. My commute is 3½ hours per day,” he said.

“The cost isn’t the issue – it’s the inconvenience of having to apply and change something that has been acceptable for 15 years,” he said.

Last month it emerged Irish motorists driving in the UK, including Northern Ireland, would have to arrange “green cards” if Britain crashed out of the EU without a deal. The green card would be required to prove that motorists were insured.

As many as 400,000 of the cards were sent by the Motor Insurance Bureau of Ireland to insurance companies and brokers in January.

Motorists will have to apply for the documentation a month in advance of their planned departure date to ensure they can drive while in the UK.

Currently, motor vehicles with a valid Irish registration are covered by the EU’s motor insurance directive, which allows free movement around the bloc without the need for extra documentation.

However, under a no-deal Brexit, the UK will fall out of the directive, and drivers who don’t display the card could be treated as uninsured and face penalties.