Scoliosis: ‘It seems as though those who shout loudest get seen first’ 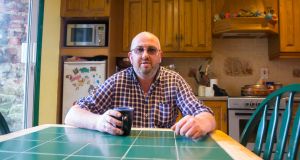 Joseph Hornick at home in Taghmon, Co Wexford, whose daughter Amber (11) was diagnosed with a severe spinal curve in October 2018. ‘We were told her case was urgent and she was in the frame for surgery, but we could get no response.’ Photograph: Patrick Browne

Desperate families of children with scoliosis are paying more than €200 for private consultant appointments to secure earlier treatment in the public system.

Families are effectively bypassing public waiting lists by seeing orthopaedic consultants privately to obtain the scoliosis diagnosis needed for their name to go on the waiting list for an operation, according to patients.

Meanwhile, waiting lists for children with scoliosis have begun to rise again, despite substantial investment and the appointment of additional staff.

“Genuine efforts have been made by staff but there are still issues around access to care. Things are going off the boil,” says Claire Cahill of the Scoliosis Advocacy Network.

The group says a majority of families facing long waits for an initial assessment are opting to go to private consultants for a quicker referral for treatment.

Children on the public outpatient waiting list are being bypassed because some families are able to pay for a private first appointment with an orthopaedic consultant, she says.

“You can basically buy your way on to the list quicker. This favours children whose parents have the fiscal ability, and the knowledge. It’s not fair.”

The group says the flow of children travelling to other European countries for urgently-needed operations has all but ended due to a lack of support and follow-up in the Irish health system.

In 2017, Minister for Health Simon Harris promised that no child with scoliosis would have to wait more than four months for treatment, but this target was never reached.

Nonetheless, major inroads were made into the backlog of cases, with the number of children waiting more than four months for an operation dropping from 145 in the autumn of 2017 to 74 at the start of 2018 and 28 in mid-2018.

According to Children’s Health Ireland (CHI), the total waiting list for treatment at Crumlin or Temple Street children’s hospital last month was 149, a reduction of 31 since January 2018.

However, this figure does not include 62 spinal patients with an offer of a TCI (“to come in”) date who, CHI says, are not ready to proceed with treatment for clinical, personal or social reasons.

When these cases are added to the waiting list, along with four older children waiting for treatment in the Mater hospital, the overall list is slightly longer than it was a year ago.

We were told her case was urgent and she was in the frame for surgery, but we could get no response

Fianna Fáil health spokesman Stephen Donnelly says the progress made in cutting waiting lists has to be acknowledged, along with the advocacy of parents. “That said, the recent loss of momentum in clearing waiting lists, along with difficulties accessing some specialist equipment for children with scoliosis means a lot more work is required.”

Dozens of children had their surgeries carried out in the UK and Germany in 2017, but last year just one child travelled abroad for treatment.

Ms Cahill says some children who did travel abroad for treatment have been left with no Irish consultant, and are forced to go to an emergency department when they need help.

Orthopaedic doctors in the children’s hospitals have argued the four-month limit set by Mr Harris is too simplistic for what is a complex condition. While acknowledging the need for timely treatment, they say resources must be provided once the treatment plan is determined by the child’s clinical needs.

Mr Donnelly says the solution in the long term is to address the “chronic” shortage of consultants in the health system.

CHI said it regretted that any child should experience a long waiting time for treatment, but added that €9.3 million in HSE funding this year and a 10-point action plan means is starting to deliver results, with a consistent reduction in waiting times.

Most children are seen within 12 months, it said, though some have to wait longer. A new patient administration system being implemented at Crumlin will give “a more defined waiting time” to families and referring doctors.

Scoliosis, a spinal curvature of more than 10 degrees, affects 1 per cent of children in Ireland. Many children’s condition deteriorates without prompt intervention.

Joseph Hornick is one of dozens of parents who have resorted to private medicine to ensure their child with scoliosis gets the urgent treatment they need.

His 11-year-old daughter, Amber, was diagnosed with a severe spinal curve in their local hospital in Wexford in October 2018. She was then referred to University Hospital Waterford, and then to Crumlin children’s hospital.

In December, she received a letter saying she was on a waiting list for a “first” assessment, but no timeframe for seeing her was specified.

“We were told her case was urgent and she was in the frame for surgery, but we could get no response,” he says. “I wouldn’t have minded if they had said ‘she’ll be seen in six months’ but we were told nothing.”

Noting the progression of her spinal curve since October, Hornick became very worried, and opted to source an appointment in early March with a consultant privately – the same consultant who would see her in the public clinic – at a cost of €220.

Since then, Amber has received two public appointments in Crumlin, but her father believes this is due to Claire Cahill (of the Scoliosis Advocacy Network) “pushing it”.

“Many people would not be able to afford a private appointment. That’s hardly fair. And it seems as though those who shout loudest get seen first.”

“Parents are so worried when they receive no timeframe or date from Crumlin in reply to an urgent referral,” says Cahill. “This lack of information pushes parents into the private system as they cannot wait indefinitely for public assessments.”