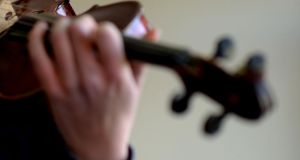 Before starting secondary school, 39 per cent of young people took part in cultural activities or classes, which dropped to 23 per cent by the time they were 17. Photograph: Cyril Byrne

Young people preparing for the Leaving Cert are more likely to drop social and cultural activities such as music, dancing and drama classes, and spend less time reading for pleasure, a new study has found.

While 19 per cent of 13 year olds said they never read for pleasure, that had increased to more than half of the same group by the time they were 17, according to work published by the Economic and Social Research Institute (ESRI).

The research, published on Tuesday, found only 14 per cent of 17 year olds read for pleasure several times a week. It found less than a quarter of 17 year olds had taken part in either art, drama, dance or music classes in the past year.

The work is based on data from more than 6,200 17 year olds involved in the Growing Up in Ireland study, which has surveyed a cohort of young people at several stages of their childhood.

The research tracked a “significant decline” in teenagers’ participation in organised cultural activities, like music lessons or drama clubs, as they moved into the Leaving Cert senior cycle.

Before starting secondary school, 39 per cent of young people took part in cultural activities or classes, which dropped to 23 per cent by the time they were 17.

The ESRI study, which was funded by the Arts Council, also found the number of young people who said they never watched television on weekday evenings increased “markedly” while they were preparing for the Leaving Cert.

The average amount of time young people spent listening to music nearly doubled between the ages of 13 and 17, from 17 minutes to over 27 minutes a day.

The study said one of the “most striking findings” was the highly gendered nature of teenagers’ likely involvement with cultural activities.

It said young women were much more likely to read for pleasure than young men, and also more likely to sing, play an instrument, or be involved in music or drama classes. Young men were more likely to be engaged in other activities such as playing computer or console games.

Fee-paying schools were the most likely to provide extracurricular activities such as choir, drama classes and musical instrument lessons, the research said.

It noted that Deis schools in areas of designated disadvantage were more likely than non-Deis schools to provide extracurricular cultural activities.

Dr Emer Smyth, author of the report, said the research related to young people’s lives before Covid-19, and expressed concern the pandemic could widen the gap between some teenagers’ take-up of cultural pastimes.

“Young people were already becoming less involved in the arts as they grew older. There is a real risk that school closures earlier in the year will have accelerated this decline, especially for more disadvantaged groups,” she said.