Sharp fall in antibiotic use as prescriptions dip 20% in 2020 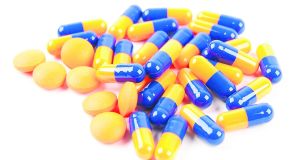 Up to the end of October, the number of private and medical/GP visit card antibiotic prescriptions fell by almost 700,000 compared to the same period last year, according to new data from the HSE. Photograph: iStock

The use of antibiotics dispensed by pharmacies in the State has fallen by nearly a fifth this year, following a sharp drop in the number of people going to doctors’ clinics for non-Covid appointments.

Up to the end of October, the number of private and medical/GP visit card antibiotic prescriptions fell by almost 700,000 compared to the same period last year, according to new data from the Health Service Executive.

Irish College of General Practitioners lead adviser on Covid-19 Dr Nuala O’Connor has described the decline as an “amazing drop-off” and a “good news story” to emerge from the pandemic.

In a recent online presentation, Dr O’Connor said when Covid-19 first emerged here in March there was a concern that antibiotic use could increase.

This is, she said, because of the effect of the virus on the respiratory system and the fact that antibiotic prescribing increases annually during the flu season.

Instead the opposite occurred, as it quickly became evident that secondary bacterial infections are extremely uncommon in Covid-19 patients, while it is well known that antibiotics are ineffective in treating viral infections.

The biggest reductions were recorded in April and May, when antibiotics dispensed fell by 31 per cent and 33 per cent respectively compared to the same months in 2019.

Ireland was in lockdown at this time and non-Covid consultations in general practice decreased significantly during these months.

“Overall prescribing went from an average of one in three consultations to on average one in five. The improvement in the rate of antibiotic prescribing has been maintained.”

The reduction was even more stark in April, with just 50 antibiotics prescribed compared to almost 2,000 in April 2019, according to the HSE Antimicrobial Resistance and Infection Control Programme data.

Commenting on the threat of antimicrobial resistance in the community, and the “frightening statistic” that it is predicted to be responsible for more deaths than cancer globally by 2050, Dr O’Connor said that the challenge after Covid-19 would be in sustaining the welcome reductions.

Attempts are ongoing here to improve the quality of antibiotic prescribing and to ensure antibiotics are only prescribed when necessary, in a bid to reduce the threat posed by antimicrobial resistance.

In Europe about 25,000 patients die every year from resistant infections. If current trends continue, 10 million deaths will be attributable to antimicrobial resistance worldwide by 2050.

According to the HSE, using antibiotics needlessly “allows bugs that cause infections to build up resistance against antibiotics and renders them useless over time”.