Airwaves buzzed with talk about the man who came a distant second, and how Casey might shake up Ireland

President Michael D. Higgins receives a warm reception as he arrives at Dublin Castle ahead of the official announcement of the presidential election vote. Video: Harry McGee 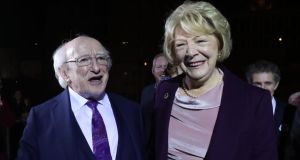 Through a long afternoon of resigned and regretful comings and goings at Dublin Castle, Michael D Higgins remained in his office and worked on his re-election speech.

He had the luxury of knowing he was home and dry. He could go to town and write whatever content he wanted, because nobody could touch him now.

He was President of Ireland again, with a landslide victory to prove it.

The final result may have been emphatic.

But that speech proved it was the right one.

Minutes after he was declared elected, Michael D swept away any lingering doubts voters may have had about allowing him serve another term.

For a fresh mandate, a special address. Suffused with passion, grace and dignity, the returning President eloquently presented his fiery declaration of an Irishness which looks outward to a shared world of promise, as opposed to “a retreat to the misery of extreme individualism”.

He outlined what “a real Republic” should mean, one that is grounded in “equality, shared vulnerabilities and collective capacities”.

And he delivered a strong antidote to some of the troubling pronouncements made by Peter Casey, who shot from last place in the presidential race to runner-up after his provocative remarks about the Travelling community.

And voters who returned Michael D to the Áras could give a little sigh of relief.

For a time, you could have been forgiven for thinking Peter Casey had snaffled the keys to the Áras with a blitz of duff moves imported from Trump’s America and a provocative focus on how the Travelling community is indulged to the detriment of mainstream Irish society.

In the space of a couple of weeks, the returned emigrant went from likeable no-hoper with a flair for nonsense talk to being the only losing candidate to attract enough votes to recoup their campaign expenses. One in five of the people who voted in the presidential election voted for him.

Much has already been said to explain his sudden leap in the polls. There is much, much more to come. The Casey Effect will keep commentators in clover for the foreseeable future.

It’s not that complicated. Listen around – around the town, in the local shop, down the pub. Listen to some of your friends, perhaps some of your family, including yourself maybe, and you will hear plenty of people tell you why they agree with Peter Casey.

It was the Travellers

His remarks about social welfare don’t really enter into it – multimillionaires banging on about people’s State benefits don’t get much traction from hard-pressed ordinary folk.

And his silly attack-ads targeting the popular Higgins didn’t impress much either.

It wasn’t Trump, it was the Travellers.

That’s why Casey got the vote.

On Saturday, he said he didn’t see it that way. But it’s why he was the biggest story in town – Michael D’s second-time success was left in the ha’penny place. Everybody knew he was going to win. Where’s the excitement in that?

So the amiable Casey and his Sunshine Band of supporters were given top billing all day. To be fair to him, it could be said that by his utterances, Peter Casey was just expanding on views expressed by the Taoiseach about “people who get up early in the morning” and welfare scroungers leeching off the early risers. Taking it up a notch.

And look how well Fine Gael is doing in the polls.

Casey, who is blessed with the initials PC, continued delighting with his refreshingly non-PC replies to media questions. He started the round of the radio programmes first thing in the morning and happily talked to reporters all day.

He even continued to say he might still win, even though the exit polls had this as an impossibility and he had seen the votes for Michael D piling up in the count centres.

Looking a bit dishevelled and shell-shocked, he said one thing in one interview and then something entirely different on the same subject in another. He might set up a political party. He would give a decision “probably at lunchtime” or maybe at the end of the week.

He might run for president again, but it could be difficult if he was already Taoiseach.

“If I had been successful I was going to suggest we invite all the Travelling community to move into the Phoenix Park for a five-year period.”

He was the centre of a somewhat hysterical media scrum at Dublin Castle. When he finally stopped talking, he pushed through the crowd of reporters and photographers and skipped to the top of the steps. He paused at the door, before turning to face the crowd. The way statesmen do.

What wisdom would he impart on this special day?

“Totally tax compliant!” he cried, with a smile.

Gavin Duffy, the communications adviser who communicated himself into last place, was next to arrive. Duffy, who was first of the business-class brigade to declare his candidacy, admitted he had been more or less swamped by the arrival on the scene of two more members of the Dragons’ Den television show.

And yet, of the three, he was the most knowledgeable about the requirements of the office and the most down to earth. He was gracious to the end, talking of “a historic mandate for my president and your president” on a day which was “about President Higgins winning a fantastic result”.

Also hovering in the vicinity of the candidates was film-maker Norma Burke, aka Bunty Twuntingdon-McFuff, a spoof candidate whose attempts to show up the ridiculous nature of much of the campaign enlivened the early stages. She decided not to make a scene on Saturday. “My work is done.”

Sinn Féin’s work was done too, but not very well. The party put a brave face on the poor performance of MEP Liadh Ní Riada. Mary Lou McDonald, who spoke earlier of “the politics of the foregone conclusion”, caused another unmerciful media scrum, and a journalist from Belfast fell down the steps.

Joan Freeman, founder of Pieta House, arrived just as the rain began bucketing down. She seemed quite shaken by her experience but handled the situation with dignity and good humour. “Are you emotional?” she was asked. “Yes,” replied Joan, “but grateful.”

Seán Gallagher, the man who came second seven years ago, arrived with his wife Trish. He came third this time.

He looked wounded, but he stuck out his chin and declared: “I’m delighted I ran.” Despite all, he will remain “committed to the country”. And he was right when he ruefully remarked: “The most important thing today is: nobody has died.”

Then the Taoiseach made a grand entrance and held a brief press conference outside. He stood in front of the Gothic revival chapel in the lower courtyard and congratulated the incoming President (delighted for him, delighted for Fine Gael’s opinion poll result). Confused German tourists kept coming over to see what was going on, wondering if this was part of the Bram Stoker show inside.

“He’s on his way, but he’ll be a while yet,” said Leo to the journalists, worried they might miss Michael D’s far less grand entrance.

On the dot of 7.30pm, with his adult children waiting on the steps and a highly excited band of Labour stalwarts who may or may not have staggered over from the crypt across the way waiting in the foyer, Michael D arrived with wife Sabina.

One of his chief advisers wore a badge featuring one of the Áras dogs. A rolling maul of supporters and cameras swept the presidential couple past a large sign headed “National Historic Properties”.

And so to the speeches. Magnanimous from all the vanquished contenders, although Seán Gallagher took a few swipes at media commentators. Peter Casey seemed emotional as he listened to the stirring words of Michael D.

He listened to the President say in a strong, clear voice: “Words matter. Words can hurt. World can heal. Words can empower. Words can divide.”

And he put his arm around his wife’s shoulders and wiped a tear from his eye.

The presidential party repaired to the nearby Radisson hotel for a knees-up. Michael D was cheered to the rafters when he arrived, crowds of supporters lining the stairs. “Seven more years,” they chanted. “And then Sabina!”

There was a huge round of applause for his dogs, Bród and Sioda, and they weren’t even there.

But the biggest ovation came when he told the crowd that “there is nothing inevitable about inequality or division”.

Then the DJ got the music going.