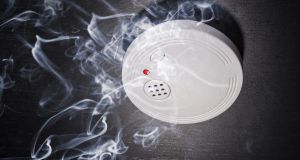 The familiar sound of a mother’s voice is more likely to rouse a sleeping child than the high-pitched wailing of a smoke alarm, a new study has shown. Image: iStock.

The familiar sound of a mother’s voice is more likely to rouse a sleeping child than the high-pitched wailing of a smoke alarm, a new study has shown.

Smoke alarms are crucial in warning families of fires in the night but children are notoriously difficult to wake using sound alone.

So researchers from Nationwide Children’s Hospital in the US set out to discover whether a detector that projected the voice of a child’s mother was more effective than a regular alarm.

The team studied 176 children, aged between five and 12, at a sleep research centre in Columbus, Ohio, and tried three different “voice alarms” on each, as well as a commonly used tone.

Sleeping children were about three times more likely to be woken by one of the voice alarms than by the shrill smoke detector, researchers found.

The study’s co-author, Dr Mark Splaingard, director of the hospital’s sleep disorders centre, said the findings could help save lives in the future.

“Children are remarkably resistant to awakening by sound when asleep,” he said, noting they sleep more deeply than adults.

“We were able to find a smoke alarm sound that reduces the amount of time it takes for many children ... to wake up and leave the bedroom.”

The study, published in the Journal of Pediatrics, found that alarms using the mother’s voice roused between 86 per cent and 91 per cent of children, compared with 53 per cent for the tone alarm.

Researchers also looked at how long it took for the youngsters to “escape” from the bedroom in which they slept, and again voice alarms fared better.

Children assisted by their mother’s voice freed themselves in 18 to 28 seconds, while the median escape time for the tone alarm was 282 seconds, or nearly five minutes.

“This study confirmed that a maternal voice alarm is better than a traditional high-pitch tone alarm for waking children and prompting their escape,” said lead author Dr Gary Smith.

Tests also showed that the mother did not have to say the child’s name for the voice alarm to be effective.

Researchers tried including first names in the voice alarm messages, but no significant differences were found between tests with or without them.

“This means one alarm could work for multiple children sleeping near each other in a home,” Dr Smith said.

Children under the age of five were not tested because they are considered too young to rescue themselves in a fire, while teenagers do not have the same difficulty in waking up to smoke alarms.

The research was conducted by the Centre for Injury Research and Policy and the Sleep Disorders Centre at Nationwide Children’s Hospital in Columbus. - PA