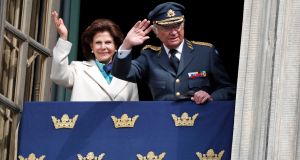 The King and Queen of Sweden will arrive in Ireland on Wednesday, May 22nd, on a State visit that will involve meetings with President Michael D Higgins and Taoiseach Leo Varadkar and a packed programme including seminars on business, culture, health and the environment.

King Carl XVI Gustaf and Queen Silvia of Sweden will arrive in Dublin, and after a number of events in the capital will travel to Athlone, Galway and the Burren before departing from Shannon on Friday evening.

Swedish ambassador to Ireland Lars Wahlund said the visit is designed to cement the relationship between the two countries at this critical time in world affairs and particularly in the European Union following the decision of the United Kingdom to leave.

“With all this uncertainty it is important that small countries stay together and strengthen their co-operation. Ireland will face a big challenge in adapting to Brexit and while Sweden is not as exposed it will pose problems for us as well. We are going to be in a new situation in Europe and increased co-operation between Sweden and Ireland will be of enormous benefit to both countries,” he said.

The ambassador pointed out that the Nordic and Baltic countries and the Netherlands have a lot in common with Ireland both in terms of their commitment to open trading arrangements and their attitude to world affairs.

“Small countries need to stick together in the EU to matter. We are all strong believers in human rights and the rule of law. While there may be shades of difference there are no major foreign policy issues on which Sweden and Ireland differ and these common values underpin the need for close co-operation.”

The ambassador pointed out that another thing Ireland and Sweden have in common is that they are not members of Nato but both have strong trans Atlantic links and have an interest in maintaining good relations with the United States.

One issue which has caused some difficulties in relations between Ireland and Sweden was the decision some years ago by the Swedish government to scale down its presence in Ireland and withdraw its ambassador to Stockholm for cost-cutting reasons.

Responding to questions on the issue Mr Wahlund said the State visit is a demonstration of his country’s strong interest in strategic co-operation with Ireland. He said a review of Sweden’s international presence is taking place and he was confident the question of representation in Ireland would form an important part of that review.

The ambassador said the presence of three Swedish government ministers on the State visit demonstrates its importance. The ministers travelling with the royal couple are minister for foreign affairs Margot Wallström, minister for energy and digital development Anders Ygeman and junior health minister Maja Fjaestad.

The first port of call for the king and queen on Wednesday will be Áras an Uachtaráin where they will meet President Higgins and his wife Sabina.

Afterwards they will go to the Garden of Remembrance for a wreath-laying ceremony and then to Croke Park, where they will be greeted by GAA president John Horan. They will be given a demonstration of hurling and football before a presentation on Swedish business in Ireland.

A number of prominent Swedish business figures, including representatives from Astra Zeneca, Tara mines, Elekta and Ericsson, which have a presence in Ireland, are travelling with Swedish delegation.

Later they will visit the Mansion House where they will be greeted by Dublin Lord Mayor Niall Ring, before going to Leinster House, where they will meet Ceann Comhairle Seán Ó Fearghaíl and Cathaoirleach of the Seanad Denis O’Donovan.

In the evening there will be a State dinner at Áras an Uachtaráin hosted by the President.

The following morning, the king and queen will go to a seminar in Dublin city centre on future health challenges facing the two countries which will be attended by Minister for Health Simon Harris and the Swedish health minister.

They will then attend a seminar on literature in the National Library, where the panellists will include President Higgins, Prof Declan Kiberd and author Joseph O’Connor.

That will be followed by a meeting with Eirgrid representatives, with the focus on new technology and the transfer of renewable energy. Minister for Energy Richard Bruton will take part in the discussions along with his Swedish counterpart.

After that the royal couple will meet the Swedish diaspora before going to Government Buildings for a courtesy call on the Taoiseach. A visit to the National Museum to see Ireland’s gold treasures and the Science Museum will follow before they host a dinner for the President and Mrs Higgins in Trinity College.

The final day of the visit will involve a journey to Athlone, where Ericson’s has a plant, for a seminar on digital infrastructure. From there the king and queen will go to the Marine Institute in Galway before a visit to the Burren. They will depart from Shannon on Friday evening.