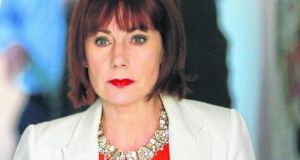 Divorce Referendum: ’The four year rule as it stands just compounds the misery that people have to go through when they’re separating or divorcing,’ says Ms Madigan. Photograph: Nick Bradshaw

The Constitutional rule which dictates that a couple must live apart for at least four years before applying for divorce is compounding their “misery”, exacerbating “conflict” and having a detrimental effect on families, Josepha Madigan has said.

Canvassing for a Yes vote in the city centre on Tuesday morning, the director of elections says it was important people were given clear and concise information around the proposed changes to the constitution.

“The four year rule as it stands just compounds the misery that people have to go through when they’re separating or divorcing, exacerbates the conflict and has a detrimental effect on children and their families,” said Ms Madigan. “I please would ask people to vote yes on Friday.”

Asked if the lack of opposition to a Yes vote in Friday’s referendum had weakened the Government’s campaign, the minister said she had engaged in a number of debates on different media platforms around the proposed constitutional amendment.

Minister for Justice Charlie Flanagan, who also took part in the canvass at the St Stephen’s Green Luas stop, echoed his colleagues call for citizens to vote in the referendum.

“In the last few days people are now beginning to tune into the issues at stake on Friday. One of them of course will be the referendum to change the constitutional provision and we’re urging everybody to become involved, exercise their choice and their vote.”

Under the proposed changes of next week’s referendum, the previous provision that people have to live apart for at least four of the past five years before they apply for divorce will be removed. If the change is approved, the Oireachtas must legislate for the amount of time people will have to be living apart prior to applying for a divorce. The Government has said it will legislate for a two-year minimum.