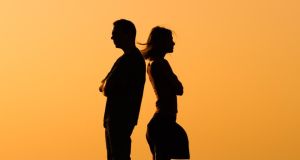 To apply for a divorce, couples must be living apart for four of the five previous years and the upcoming referendum will ask voters if they wish to remove this condition or keep it in the constitution. Photograph: iStock

Carlow has had the highest divorce rate in Ireland since 2015, an analysis of applications to the Circuit Court shows.

The most recent data from the Courts Service, which provides divorce application figures per county from 2000 to 2017, shows Carlow’s current rate of 1.2 divorce applications per 1,000 population has now surpassed that of Dublin.

While in 2017 it was still above the national rate, Clare, Cork, Kerry, Longford, Sligo, Westmeath and Wexford all had a rate higher than Dublin.

Three counties – Donegal, Cavan and Kildare – have been continuously below the national rate since 2000.

Divorce only became legal in Ireland in 1996 following a tightly contested referendum the year before in which the Fifteenth Amendment of the Constitution was passed by 50.3 per cent of voters.

To apply for a divorce, couples must be living apart for four of the five previous years and the upcoming referendum will ask voters if they wish to remove this condition or keep it in the constitution.

Yesterday, the Minister for Culture Josepha Madigan urged voters to support the removal of restrictions in the constitution, but No campaigners in the Alliance for the Defence of the Family and Marriage said that passing the referendum would inevitably increase the rate of divorce in Ireland with adverse consequences, they said, for children.

“The emphasis in divorce societies is on the partners, not the children, but the damage to children is long-term,” spokesman Seamus de Barra said.

Richard Greene, the chairman of the group and a long-time anti-divorce campaigner, said that increases in the divorce rate would put further pressure on social services such as housing and psychological support.

The most recent census figures show that there are 103,895 divorced people living in Ireland, almost three times greater than the 35,059 divorced people recorded in the 2002 census. More women than men apply for divorce with more than 50 per cent of applications each year submitted by women, peaking in 2007 when 60 per cent of the applications for divorce were submitted by women.

In contrast to the number of judicial separation applications which, apart from a spike in 2014, has been declining year on year and is now 46 per cent less than in 2008, the numbers applying for divorce have seen greater fluctuation.

Applications tend to fluctuate within counties with numbers increasing and decreasing intermittently. Some counties see very large differences in some years.

The biggest change in numbers applying year on year was in Westmeath. In 2010 just 11 people applied for a divorce there, down 87 per cent on the previous year when 86 people applied.

However, in 2011, 65 people applied for divorce, representing a 490 cent increase on the previous year.

Galway also saw some notable fluctuations. In 2002, just 19 people applied for divorce, down 82.5 per cent on the previous year when 115 people applied. In 2003, the numbers applying increased almost six fold to 110, an increase of 479 per cent.

While many counties have seen a decline in the numbers applying for divorce from 2015, 12 counties have seen an increase in numbers since then including Carlow, Cork, Kerry, Kilkenny, Leitrim, Longford, Mayo, Monaghan, Roscommon, Sligo, Westmeath and Wexford.