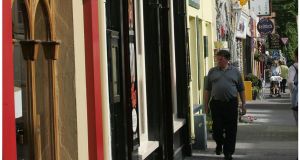 Half of Kenmare’s usual tourist trade comes from abroad, compared with 80% in Killarney and Sneem. Photograph: Alan Betson

The loss of foreign visitors is being compensated for by a growth in the number of “staycationers”, Kenmare businesses, hit by heavy flooding last week, have said.

Patrick Foley of Foley’s restaurant on Henry Street, who avoided last week’s flooding, remains confident about the future. “Something like 500,000 have opted to stay at home rather than go to Spain this year,” he said.

“Yes, there are no accents, no Yanks and no dollars, but we have lots of Irish people spending money here instead and anyone in Kerry complaining in August, there’s something wrong with them.”

However, Jer Foley, who has run Ó Donnabháin’s restaurant for the past 26 years, said his holiday-home business had been affected by Covid-linked cancellations.

Last week, 14 Germans who regularly stay each September cancelled their booking amid concerns that they would have to self-isolate and quarantine for a fortnight if they were to holiday in Ireland.

“I think we will have a lot of reputational damage from how we are handling this – the Germans who come to Ireland are very different to those who go to Magalouf that you end up fighting over the sun lounger – they are very good for us in September and October but a lot of them are cancelling.

“Health authorities across Europe should be able to test people before flying and give those who pass a certificate saying that they are clear of Covid to present at the airport, rather than having to undergo a 14-day quarantine.

“For us, between Easter to the end of October, 70 per cent of our business would be foreign and 30 per cent would be Irish, save in July and August when it would be 50/50 – it’s good at the moment with Irish tourists but I would be worried about September and October when the Irish market ends,” he said.

Less than a week after it was hit by rising waters, Quill’s Irish Gift Shop is once open again for business. Owner Joe Quill said he was looking forward to a busy August.

“We had about a foot and a half of water in the shop but the local Kerry County Council lads, Connie Cremin and Donal Casey, were out to us with sandbags,” he said.

“If it wasn’t for them we would have lost 100 per cent of the stock on the flooded part of the shop and we were able to reopen on Friday,” said Mr Quill, whose family also runs the Wander Inn restaurant and the Lansdowne Hotel.

Half of Kenmare’s usual tourist trade comes from abroad, compared with 80 per cent in Killarney and Sneem. “[Those towns] are hugely dependent on bus tours. That said, we are missing out on probably 30-40 coaches a day,” he said.

Usually, continental European visitors dominate in May and June, while English and Americans have tended to dominate in the town in July, August and particularly September.

He said the Lansdowne Hotel had “good bookings for all of August and the first two weeks of September”, while Irish tourists were spending more on food in the Wander Inn than Americans usually would.

“That’s what is keeping us afloat at the moment,” he said, though the reopening of smaller pubs would help him since it would “help to turn my tables quicker”.

“What’s happening now is somebody comes into the Wander Inn and they are trying to stay at the same table for as long as they can,” said Mr Quill, who fears that business will drop sharply after the middle of September.