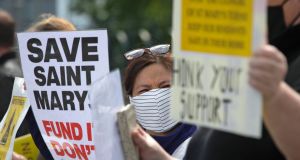 Campaigners call on the State to step in to keep St Mary’s Nursing Home on the Merrion Rd in Dublin open. Photograph: Colin Keegan, Collins Dublin

The Labour Court has ruled that 64 staff at the Sister of Charity-owned Caritas convalescent home on Dublin’s Merrion Rd should be given public sector-scale redundancy payments. *

Last month the Sisters announced the closure of two of its nursing homes, St Mary’s and St Monica’s in liquidation. However, Caritas was closed last March when 23 of its 64 staff contracted Covid-19.

Last week, the Sisters of Charity said they were “extremely disappointed to learn that there may not be enough funds to pay statutory redundancy” to staff in St Mary’s and St Monica’s, but no mention was made of Caritas.

The Labour Court has also ruled Caritas staff with less than two years’ service should get “fair and reasonable” pay-offs . A ‘top-up’ payment promised in June to workers should also be paid, it said.

In its finding on Monday, the Labour Court noted that the employer did not attend the hearing “convened at very short notice”. The INMO, Siptu, and Forsa unions did, as did the liquidator, Baker Tilly.

The Court said it has previously ruled that staff employed by Section 39 bodies – run independently, but funded by the State – should receive redundancy payments equivalent to those paid to public servants.

The HSE funded 70 per cent of Caritas’ staff costs. Recognising that Caritas is likely to be “placed in liquidation almost immediately” the Court advised the parties to accept its recommendations.

Lorraine Monaghan, of the INMO, said one in three of Caritas’ staff had caught Covid-19: “The Sisters of Charity should live up to their name. They have substantial assets across Ireland, yet are shirking their responsibilities by dismissing their loyal staff without paying a penny,” she said.

It is accepted “that Caritas is regrettably insolvent. But wealthy institutions should not hide behind complex company structures to avoid their responsibilities,” she said.

“Staff are understandably very upset and disappointed in both the board of management and the Sisters of Charity,” said Siptu’s Brian Condra.

The Sisters of Charity face “an undeniable moral obligation” in St Mary’s, St Monica’s and Caritas to agree “decent and fair redundancy terms for our members”, he said.