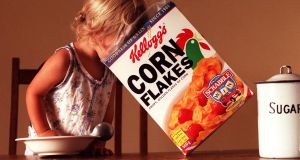 Under the traffic light system, the box will have a panel listing energy, fat, saturates, sugars and salt. Photograph: Peter Morris/Fairfax Media

Breakfast cereal maker Kellogg’s is to adopt the colour-coded ‘traffic light’ nutrition labelling system on the front of its boxes from the beginning of next year.

The new labelling will start to appear from January as the cereal maker undertakes a redesign of all its boxes.

Under the traffic light system, the front of the cereal boxes will have a panel listing the energy, fat, saturates, sugars and salt, with each box an appropriate colour depending on the amount of a particular ingredient in the mix.

If a “sugar” box is red, for example, it will indicate the product is high in sugar while amber will mean sugar is present at medium levels. If it is green, it indicates it is low in sugar.

While it has been in use for several years in the UK and Ireland and used by retailers including Tesco and Marks & Spencer and the cereal maker Weetabix, the system is not mandatory and its adoption by Kellogg’s, the most popular cereal maker in Ireland, could be considered a big step forward for an easy-to-understand system.

Advocates of the system say it allows people to see at a glance whether it is a healthy choice. However, many dieticians are critical of it as they believe it is overly simplistic. Concerns have been expressed that it could put people off buying nutritious products which are high in fat including milk, cheese and yoghurt.

“For more than a decade all our packs have carried black-and-white guideline daily amounts on the front but we recognise times change and people now want more help making healthy decisions,” said the head of Kellogg’s Ireland, Ruth Hughes.

“Following our announcement late last year to overhaul our cereals, we decided to look again at labelling. So we consulted with a number of stakeholders and they said we should change. We’ve listened and now we’re acting. After all, just like people, brands evolve their thinking too.”

The decision to change its front-of-pack labels comes after years in which it has been reducing the amount of sugar in some of its product lines including a 40 per cent reduction on the sugar content of Coco Pops and 20 a per cent sugar reduction in Rice Krispies cereal.