Important legislation being ‘backed up’ because of delaying tactics, Varadkar tells Dáil 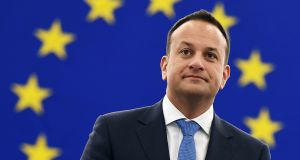 Leo Varadkar: “The truth . . . is that the ongoing filibuster of justice legislation in the Seanad is causing other legislation to back up, including important legislation such as this.” Photograph: AFP

The Seanad filibuster of a controversial Bill on judicial appointments is delaying other important legislation going through the Oireachtas, Taoiseach Leo Varadkar has told the Dáil.

Hitting out at the delay, Mr Varadkar said Minister for Justice Charlie Flanagan could not deal with other important Bills because he was in the Seanad dealing with the Judicial Appointments Commission Bill.

The Taoiseach was responding to Labour leader Brendan Howlin who questioned the delay in dealing with his legislation to combat online harassment and abuse.

Mr Howlin highlighted the case of Jackie Fox who had campaigned about internet abuse after her daughter Nicole, known as Coco. He said she “died by suicide in January this year after prolonged and vicious online harassment”.

Mr Howlin who had a meeting with Ms Fox, said she was accompanied by another woman whose son is enduring similar harassment. There are many people enduring incredible pressure, he said, as he called for action on his Harassment, Harmful Communications and Related Offences Bill 2017.

The Wexford TD said the Bill was urgent and there was co-operation across the House and with the Department of Justice to implement this legislation.

The families “have been to the gardaí and the gardaí say there are no laws to address the type of appalling behaviour that drives children to suicide”.

Mr Varadkar expressed his sympathies about the suicide and said the Minister for Justice was committed to working with other parties to pass the legislation.

But he said “unfortunately, the Minister is not present at the moment. He is in the Seanad where a filibuster is going on with other justice legislation.

“The truth, whether people wish to admit it or not, is that the ongoing filibuster of justice legislation in the Seanad is causing other legislation to back up, including important legislation such as this.”

Opponents of the Bill have repeatedly been accused of filibustering or speaking at length with the purpose of delaying the legislation.

The Judicial Appointments Commission Bill was introduced in the Dáil in May last year and completed in May this year after which it went to the Seanad.