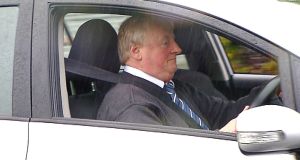 Bill Kenneally. “It should be remembered that these matters are particularly sensitive, and that Mr Kenneally is due to stand trial for further alleged offences,” Judge Barry Hickson cautioned. File photograph: Patrick Browne

The retired judge who is heading up a commission of investigation into the handling of allegations of sexual abuse against former sports coach Bill Kenneally has written to State agencies seeking written submissions from them prior to the start of formal hearings.

Retired Circuit Court judge Barry Hickson confirmed he had written to all the parties mentioned in the commission of investigation terms of reference, including An Garda Síochána, the South Eastern Health Board and Basketball Ireland, seeking any legal submissions they might wish to make.

The terms of reference also refer to Waterford diocese and any political figures or public representatives with knowledge of the allegations of sexual abuse made against Kenneally, formerly of Laragh, Somerville, Co Waterford, between 1985 and 1992.

Judge Hickson said that following consideration of the legal submissions received in response to his letter, he hoped the investigation would be in a position to commence formal hearings later this month to try and establish how any allegations against Kenneally were handled.

He said he recognised that the formal commencement of the investigation, on Monday, was an important day for the survivors of abuse committed by Kenneally who had been calling for such an investigation for a number of years.

He pledged to ensure the facts governing who knew about Kenneally’s abuse of teenage boys in Waterford and how they acted would be established in line with the 12 terms of reference set out for the commission of investigation by Minster for Justice Charlie Flanagan.

But he cautioned there were currently criminal proceedings in train in relation to Kenneally who is facing 99 charges of abusing three boys in Waterford in the 1980s and he urged all concerned to refrain from any comment that might impact on those criminal proceedings.

“As there are criminal proceedings ongoing, it has been complex to establish this commission of investigation and I want to acknowledge the considerable work undertaken by the Department of Justice and Equality with the assistance of the Attorney General’s Office.

“This commission will inquire into what, if any, level of knowledge of the offences committed by Bill Kenneally was held by a number of organisations including An Garda Síochána, the Waterford diocese, the South Eastern Health Board, Basketball Ireland and certain political figures in the relevant time period.

“It should be remembered that these matters are particularly sensitive, and that Mr Kenneally is due to stand trial for further alleged offences. Central to the work of this commission is ensuring that the work we do in no way adversely impacts on any further criminal proceedings, including on the accused’s right to a fair trial or on the rights of those who have made further allegations of sexual abuse to have their claims fully investigated and, where appropriate, prosecuted.

“I want to thank everyone concerned for refraining from any public comment that might undermine criminal proceedings.”