Deportation highest among people from Pakistan and China 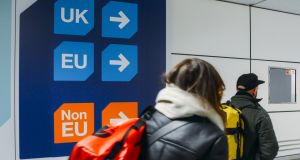 Some 30 people have been deported to Pakistan from Ireland so far in 2018 followed by 19 deportees to China. Photograph: Istock

Most of the people deported from Ireland so far this year came from Pakistan, China, Nigeria and Brazil, according to data released by the Department of Justice.

Some 30 people have been deported to Pakistan so far in 2018 followed by 19 deportees to China (including Hong Kong), 16 to Nigeria and 11 to Brazil. A further eight people were deported to Malaysia and five others to both India and Zimbabwe. A total of 137 people had been deported by the end of October 2018.

The number of people deported to Pakistan has almost doubled from last year when 18 people were sent back after unsuccessfully applying for asylum. Conversely, the number of deportees to China has fallen considerably, dropping from 32 last year to 19 so far this year.

The number of deportees to Brazil has risen slightly from eight to 11, while the number sent back to Nigeria dropped from 18 in 2016 to 16 so far this year.

The number of deportations to Nigeria has fallen significantly since 2016 when 179 people were removed from the State. There has also been a drop in deportations to South Africa, Georgia, Zimbabwe, Albania and Ghana in recent years.

In June 2015 the McMahon Working Group report into direct provision and the protection process noted that the outcome of the Ruiz Zambrano case – which ruled that the non-EU parents of an EU citizen child must be allowed to live and work in that EU state – led to a significant number of deportation orders being revoked in 2013 and 2014. Since then, the number of deportations has been noticeably lower than in previous years.

Meanwhile, a total of 168 people have chosen to voluntarily return to their country of origin so far this year after being faced with the threat of deportation. Last year, 181 people returned home voluntarily after their application for asylum was rejected, and in 2016, 187 returned of their own volition. The number of voluntary returns has dropped significantly over the past decade – in 2008, 536 people chose to return home voluntarily.

Enda O’Neill from the UN Refugee Agency says a stronger emphasis should be placed on voluntary return as an option for those facing deportation. He also said awareness programmes and counselling could facilitate greater interest in the programme. The length of time a person spends in the protection process can also affect whether he or she will consider voluntary return, he says. “If you’ve had a fairly swift and efficient process that will lead to greater confidence in how the system is managed. It’s easier to have that conversation with people who haven’t been living in the country for a long time.”

Data released by the Department of Justice last week revealed only one-fifth of people who have received deportation orders so far this year had been removed from the State. However, according to the McMahon report, deportation is “generally a relatively rare occurrence internationally” and the implementation of about 20 per cent of deportation orders is “in line” with the average across the EU.