Payment of €240 per week available to fathers on paternity leave 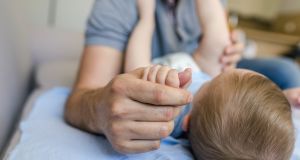 The paternity payment will be increased by €5 a week from late March next year. Photograph: Istock

More than 50,000 fathers have taken a two-week paternity leave payment since it was introduced in September 2016.

Figures from the Department of Employment Affairs and Social Protection show 51,409 fathers have taken the €240 a week paternity benefit payment over the last two years.

Last year, 26,559 fathers availed of the welfare payment, which is offered to fathers who take leave from work after the birth of their child, or after they adopt a child. Up to the start of November this year, 19,837 fathers had taken the paternity benefit payment.

The payment will be increased by €5 a week from late March next year, following a decision in last month’s budget.

The benefit is available for people covered by PRSI, and 4,100 self-employed fathers availed of the payment since it was introduced.

The department plans to introduce an expanded parental benefit scheme, to give both parents an additional two weeks of paid leave of €245 a week

In the first four months of the scheme, 5,013 fathers took the paternity payment, according to the figures.

Minister for Employment Affairs Regina Doherty said she was “delighted” with the uptake of fathers availing of paternity benefit.

The department plans to introduce an expanded parental benefit scheme, to give both parents an additional two weeks of paid leave of €245 a week, which can be taken in the first year of the child’s life. The scheme is expected to be in place by the end of 2019, following the passage of required legislation.

“This new scheme is designed to be family-friendly and flexible. Parents will be able to take the new paid leave any time, and at the same time if they so wish, during their child’s first year,” Ms Doherty said.

“I am particularly happy that, with both paternal leave and this new parental leave scheme, we are creating more opportunities for fathers to have the time to spend with their new arrivals as this greatly benefits both child and parent,” she said.

Parents can currently avail of over four months (18 weeks) unpaid parental leave before the child is eight years old.