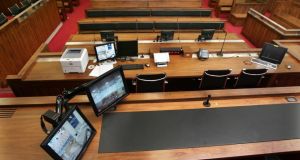 A judge has criticised security at the new €35 million courthouse in Cork after hearing a woman brought a claw hammer into the building with a view to intimidating another person.

Judge Brian O’Callaghan said it was “disgraceful” that Julianne O’Farrell (27) was able to bring the hammer into Anglesea Street Courthouse, which opened in May 2018. She was only apprehended by the vigilance of two gardaí in the foyer, he said.

Unlike the Criminal Courts of Justice in Dublin, there is no screening system at Anglesea Street Courthouse and Judge O’Callaghan said it was extraordinary that somebody could walk in off the street with a weapon, as O’Farrell did.

Garda Jason Daly told Cork Circuit Criminal Court he had been on duty on September 5th, 2018 when he and a colleague saw O’Farrell take a claw hammer from her handbag as she waited outside Cork District Court.

She handed it to a male companion. When the man saw the gardaí watching him, he handed the claw hammer back to O’Farrell, who put it back into her handbag.

O’Farrell of Marble Park, South Douglas Road, Cork, pleaded guilty to possessing a claw hammer in a public place on September 5th, 2018 with intent to cause injury, incapacitate or intimidate another person.

Garda Daly said O’Farrell had 105 previous offences including for robbery, thefts and drug offences. She had no previous convictions for any possession of offensive weapons.

‘Brazenness with a capital B’

O’Farrell’s companion was also charged with an offence but who has since died, he said.

Judge O’Callaghan paid tribute to the gardaí for their vigilance and said a claw hammer was “a serious weapon capable of causing serious injury to a person”.

He accepted that O’Farrell had pleaded guilty and that was a mitigating factor to her credit but there was no excuse for bringing a weapon to court.

“An aggravating factor is the fact this took place outside the front door of a court room when a court was in session,” he said. “This is bringing brazenness with a capital B to the ultimate level.”

He sentenced O’Farrell to two and a half years in jail but suspended the final 12 months on condition that she would be of good behaviour and keep the peace for a period of two years upon her release from custody.

In response to Judge O’Callaghan’s comments , the Irish Courts Service said it was “very aware of the needs for security in and around court buildings.”

A Courts Service spokesman said they did not discuss the specifics of security in any particular venue but they work closely with local staff, regional management and gardaí.

“The levels of business, and the type of cases being heard in any given court will be a major factor in what levels of security may be provided by the gardaí, our own staff, or private security companies,” he said.