Farmers say further protests not likely until after election

Protesting farmers in their tractors and other vehicles brought traffic to a standstill in parts of Dublin city centre. Organisers say they are planning to continue their demonstration overnight. Video: Bryan O'Brien 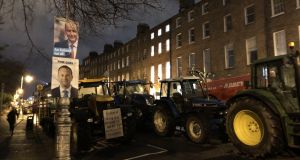 The farmers parked their tractors around Merrion Square and St Stephen’s Green overnight and on Thursday morning. Photograph: Sarah Burns

Farmers who staged a major protest in Dublin over the past two days over low beef prices have said no further demonstrations are planned before a new Government is formed.

The Individual Farmers of Ireland, who organised this week’s protest, said it would refrain from any more large-scale action until the incoming Government had an opportunity to address the crisis in the beef sector.

John Dallon, a farmer from Castledermot, Co Kildare and a spokesman for the IFI, apologised to members of the public who had their travel plans disrupted by the demonstration.

“We needed to make a big impact and drive home the message that beef farmers can’t make a living with the prices they are currently being paid,” Mr Dallon said.

He said it was unlikely any further demonstrations would be staged before April at the earliest.

The latest protest resulted in major disruption to traffic in Dublin for several hours on Thursday afternoon as a cortege of tractors made its way from the city centre through the Dublin Port Tunnel and onto the M50 before dispersing.

Gardaí reported severe delays along the route with the Dublin Port Tunnel closed to other traffic for a period.

Long tailbacks also formed on the M50 as tractors travelled in convoy at a slow pace along all three lanes of the southbound carriage between the M1 and M4 interchanges.

Although gardaí had forecast that about 400 tractors would take part in the overnight protest, the number of vehicles was estimated at between 100 and 150.

It was the third large protest by farmers in recent months with many farmers sleeping overnight on Wednesday in their tractors while some slept in local hotels.

The IFI, whose actions have not been supported by the main farming organisations like the Irish Farmers’ Association, said the latest protest was designed to highlight the frustration felt by farmers at the lack of progress at addressing prices paid to beef farmers.

“We wanted TDs, who are looking for votes, to see that farmers are not going away,” Mr Dallon said.

The IFI remain concerned about the lack of progress resulting from recently convened talks of the Beef Task Force when representatives of the main supermarket groups met directly with farming bodies for the first time.

“The 50 cent differential between what beef farmers in Ireland and Britain are paid cannot be tolerated. We are currently getting €300 less per head of cattle since 2017. It’s unsustainable when you’re getting less than the cost of production,” Mr Dallon said.

He acknowledged that the protest has caused “major traffic disruption” in Dublin over the two days. “The guards have been very courteous to us while the people of Dublin have been very patient.

“A lot are asking us what’s it all about and there has been a lot of sympathy from people. They understand farmers are being unfairly treated.”

Mr Dallon also called for a review of the Government department with responsibility for rural affairs.

“The effectiveness of the department needs to be examined. Small businesses like pubs in rural Ireland are shutting down bit by bit, while families are having to travel longer distances all the time to do their shopping.”