Sinn Féin comes under pressure over comments by councillor about Taoiseach

Fine Gael has pledged to keep wages rising and to create 200,000 new jobs between now and 2025 at the launch of the party's four part economic plan. Video: Bryan O'Brien 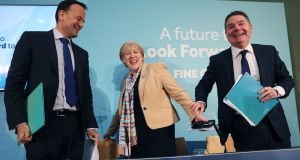 Fine Gael and Fianna Fáil have both promised increases in public spending and tax cuts as the two parties turned to their economic plans on day three of the general election campaign.

Though the rivals continue to attack each other’s record of economic management, competing statements of economic priorities launched yesterday were similar in many respects, with both relying on a strongly-growing economy over the coming years to pay for a series of spending and tax-cutting commitments.

The smaller parties fought to break into the election debate, with Sinn Féin promising to block increases in the retirement age and Labour demanding more measures to combat violent crime.

Though neither of the two big parties have yet revealed the detail of their economic and budgetary programmes – which are likely to be unveiled next week – Minister for Finance Paschal Donohoe indicated that Fine Gael’s tax-cutting plan would see the party commit to increasing the threshold for paying the higher rate of income tax from €35,000 to €50,000 over the five years of the next government.

Fianna Fáil finance spokesman Michael McGrath said his party would prioritise increases in public spending over tax cuts, but confirmed it would also propose some tax cuts in its manifesto.

Fine Gael kept up its attacks on Fianna Fáil by pledging not to return to the “boom-bust” cycle it said had been typical of the party when it was in government.

But Taoiseach Leo Varadkar and Mr Donohoe said they would run a government which would increase wages, add 200,000 jobs, invest in public services and infrastructure, cut taxes and also run surpluses.

Asked how they would deal with an economic slowdown, Mr Varadkar insisted that the surpluses for which the Minister for Finance had budgeted could absorb any hit on the exchequer.

However, he acknowledged that in the event of an “unforeseen calamity” all tax and spending plans would be reviewed. If there is no trade agreement between the European Union and the UK, he said, he would allow borrowing to rise.

Mr McGrath criticised Fine Gael’s ability to achieve value for money in government and pledged that his party’s focus would be on investing more money in public services. He said that his party had prevented Fine Gael from implementing more “regressive” tax increases in the outgoing government under the confidence-and-supply agreement.

Meanwhile, Sinn Féin faced pressure about comments by a party councillor who had questioned Mr Varadkar’s connection with Ireland because of his part-Indian heritage, He had also suggested he would prefer a “family man” to be taoiseach than Mr Varadkar, who is gay.

Party leader Mary Lou McDonald defended Paddy Holohan, a councillor in Tallaght, and said had done the right thing by apologising, and would not be leaving the party.

Mr Varadkar said he understood Mr Holohan had apologised “and, you know, that’s good enough for me”.

The Taoiseach said he believed anyone in Ireland who is “from a minority background, whether mixed race or gay or lesbian, has experienced some form of racism or homophobia” in their lives.

“I am fortunate in that I haven’t received too much of that. I know it’s been a lot worse for a lot many other people.”