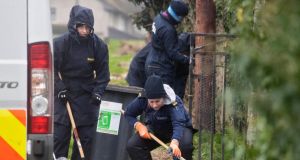 Gardaí search an area around a house at Rathmullen Park in Drogheda on Thursday in relation to the murder of Keane Mulready-Woods. Photograph: Colin Keegan/Collins

Family members of murdered teenager Keane Mulready-Woods have been sent images and videos purporting to depict the boy’s murder and dismemberment.

Gardaí believe the majority of videos and images circulating on social media, including all of those sent to the 17-year-old’s family, are fakes. However, investigators believe some material may be in circulation which is genuine.

On Thursday, the Garda appealed to the public to stop sharing the extremely graphic and “unverified” images and videos purporting to show the teenager’s murder and dismembered corpse.

“They are distressing to Keane’s family and if verified are disrespectful images of the deceased and provide false support to the perpetrators of this brutal crime,” a spokesman said.

The Garda also appealed to anyone with information on the origin of the material to contact them. Sources said family members have received images and video from anonymous email accounts, which has caused them deep distress.

The most common video in circulation, which depicts a youth being assaulted, does not show the Drogheda teenager.

Instead it depicts the violent attack on a youth in Artane earlier this month which resulted in the teenager losing a finger.

However, gardaí have intelligence that parts of the murder of Mr Mulready-Woods or its aftermath may have been recorded.

If some of the images turn out to be genuine, gardaí believe they were likely shared in a bid to intimidate witnesses and rival criminals, a common tactic in UK gang culture.

Investigators also believe the boy’s limbs were dumped in Dublin to send a similar message.

The chief suspect for Mr Mulready-Woods’s murder is a violent Dublin criminal who has killed at least once before. He remained at large last night as gardaí continued to forensically examine the house at Rathmullen Park in Drogheda where they believe the teenager was murdered on Sunday evening.

Blood has been found in the house and there are signs attempts were made to clean it of forensic evidence. Gardaí are also reviewing CCTV footage from the area and conducting door-to-door inquiries.

They are still awaiting confirmation that a human head found in a burning Volvo V40 SE LUX 1.4 diesel in Ballybough in Dublin on Wednesday is that of the deceased.

The car’s number plates at the time it was stolen were 161D48646. These plates were changed, and at the time the car was found partially burnt out, were 141MO1925.

Gardaí want to speak to anyone who saw the Volvo V40 parked, with either registration plate, between December 15th, 2019 and January 15th, 2020.

Gardaí said the Volvo had four matching alloy wheels at the time it was stolen, but one wheel was changed; they would like to speak to anyone with knowledge of this.

There are several working theories for why the 17-year-old was murdered, with one possibility being he was killed in revenge for the murder of Richard Carberry (39) who was fatally shot last November in Bettystown as part of the Drogheda gang feud.

If the deaths are connected, Mr Mulready-Woods will be the third person to be killed in the feud.

Taoiseach Leo Varadkar, who is currently campaigning for the 2020 general election, has promised to visit Drogheda in the coming days.

He called the death “the most gruesome, grotesque murder that I can think of” and promised investigators will have the resources to bring the killers to justice.

Bishop Michael Router, the Auxiliary Bishop of Armagh, has offered to mediate between both sides in the Drogheda feud. The boy’s killers have “blood on their hands” and “we all have a responsibility to assist the Gardaí to apprehend not just the perpetrators of this evil, but also the gang leaders who orchestrated it,” the bishop said.

A public protest is to take place in Drogheda this Saturday against the ongoing violence.

Drogheda Chief Superintendent Christy Mangan said the feud was being fuelled by cocaine and anyone purchasing the drug was contributing to the violence.

Gardaí areappealing for any person with information, or any road user with video footage who may have been in or passed through the Ballybough Road, Clonliffe Road, Poplar Row, Luke Kelly Bridge area between midnight on Tuesday, January 14th and 2am, Monday January 15th, 2020.