Taoiseach does not meet Prokopios Pavlopoulos due to election campaigning 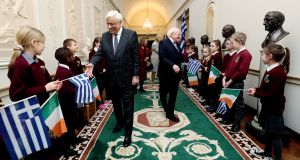 It fell to Minister of State Finian McGrath to represent the Government during the State visit of president of Greece Prokopios Pavlopoulos to Áras an Uachtaráin on Thursday, as all senior Ministers were unavailable given the upcoming general election.

Taoiseach Leo Varadkar was due to meet Mr Pavlopoulos at Government Buildings on Thursday afternoon, but the meeting was cancelled earlier that morning, with Mr Varadkar attending events on the Fine Gael campaign trail instead.

President Michael D Higgins and his wife Sabina rolled out the red carpet for the visiting head of state, with a military guard of honour and a 21-gun salute outside Áras an Uachtaráin to welcome Mr Pavlopoulos and his wife Vlassia Pavlopoulou.

President Higgins and Mr Pavlopoulos had a short meeting together, while a delegation of Greek officials including Konstantinos Vlasis, the deputy minister of foreign affairs, attended a bilateral meeting with Irish officials.

Mr McGrath, who is not a member of Cabinet but sits at its meetings, did not attend the bilateral meeting.

He remained outside while the two delegations filed into the drawing room, and shortly afterwards left for the Garden of Remembrance, where he later represented the Government at a wreath-laying ceremony attended by Mr Pavlopoulos.

Mr McGrath is the only TD who sits at Cabinet who is not standing in the upcoming general election. One senior Áras source said there was a sense of disappointment that the Government had not sent a senior Minister to attend the welcome ceremony.

Mr Varadkar had been scheduled to meet Mr Pavlopoulos at Government Buildings shortly after 2pm, following the wreath-laying ceremony.

Despite the meeting being cancelled the Greek president travelled to Leinster House to meet Ceann Comhairle Seán Ó Fearghaíl.

Responding to queries on the cancelled meeting, a spokesman for Mr Varadkar said “protocol dictates we do not comment on the details of the visits of heads of State”.

Yesterday afternoon Mr Varadkar attended an election press conference on Fine Gael’s plan for the economy held on South William Street, after which he travelled to Longford for further campaign events.

As a visiting head of state, diplomatic protocol is for Mr Pavlopoulos to meet his equivalent, which would be Mr Higgins, and a meeting with Mr Varadkar as head of Government would only be a courtesy.

Mr Pavlopoulos will visit the Mansion House and Trinity College Dublin on Friday, the second of his two-day visit.