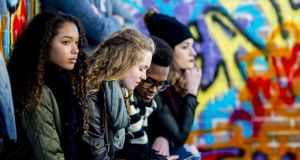 “When teenagers meet in playgrounds they are accused of loitering, of taking over and of rowdiness.” Photograph: Getty

Nearly all teenagers want more places where they can hang out with their friends and hardly any of them want more sports facilities in their community, according to a report from South Dublin County Council.

The survey shows that more than 90 per cent of teenagers want areas for hanging out and unstructured activity while only 5 per cent asked for more sports facilities.

“The results are clear: that providing more organised activities for teenagers is not what they want,” the report states. “Hanging out is seen as a desirable activity in itself and is not a result of having nothing to do.”

The report says South Dublin Council Council is proposing a provision of €500,000 in 2019 and a similar provision over the following two years to provide hang out facilities for teenagers.

The survey of about 500 teenagers, carried out by the council, found that young people feel excluded from many public places.

“When teenagers meet in playgrounds they are accused of loitering, of taking over and of rowdiness. A congregation of teenagers is frequently described as being anti-social when in fact it is usually just normal social interaction. Parents of younger children often see groups of teenagers using playgrounds in a very negative light,” the report states.

It adds that teenagers often feel harassed by adults wherever they go and that they feel fast-food outlets and shopping centres provide somewhere they can go to see and be seen and socialise with their friends.

The report notes that teenagers have “ample opportunities” to engage in sports across south Dublin. But it goes on to say that what they really want is areas where they can play in a casual manner or casually engage in physical activity.

The report recommends creating a series of hangout/meeting places for teenagers. “The most popular suggestions from the survey were for places to sit and chat and access play facilities such as swings, climbing and zip lines,” the report says. “Teenagers require more vigorous play than younger children so swinging, spinning and anything that thrills is always popular,” it adds.

It also recommended creating areas for unstructured physical activity such as all-weather pitches, skate parks and basketball courts. “Generally this is self-directed activity rather than organised sport,” the report says.

It goes on to suggest placing cafes in parks. “These would provide a service to all park users but would be particularly beneficial to teenagers as a social outlet,” it says.

Proposed projects for 2019 include:

-A robust area of activity for teenagers in Collinstown Park in Clondalkin with a goal, basketball net and a large play equipment items, provision of WiFi and seating scattered throughout the area at an estimated cost of €120,000.

-Sport facilities in Griffeen Park in Lucan as well as a tea shop/coffee-pod at an estimated cost of €110,000.

-A formal meeting place for teenagers in Ballycragh Park in Rathfarnham along with a play space/activity area at an estimated cost of €110,000.

-In Tallaght, a giant bench has been proposed for Kingswood to act as a formal meeting area for teenagers, as well as other large play type equipment for older children and WiFi provision at an estimated €40,000. A multi-use games area is earmarked for Avonbeg at an estimated cost of €80,000.