Flanagan criticises TDs who liken home reposessions ‘to the Famine’ 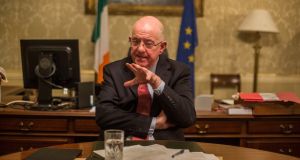 Minister for Justice Charlie Flanagan has said the seizure of property by banks from indebted homeowners should never be routine but “I cannot agree with some of my Dáil colleagues who say repossession is a step too far”.

He said: “No financial institution will lend money to a debtor if the security cannot be realised.”

The Minister said the rate of repossessions in Ireland was low by international standards and the numbers were “coming down, particularly with reference to the family home”.

The issue of repossession evokes “high emotion”, he said but he told The Irish Times it was “wrong of politicians and commentators to make comparisons with the Famine”, which he claimed were “wide of the mark”.

He further claimed Sinn Féin’s response to the incident in Strokestown, Co Roscommon last month underlined his “strongly held belief” that the party was unfit to be in government.

The Co Roscommon incident saw the eviction of a farmer and siblings from a property and a subsequent vigilante attack on security workers who carried out the eviction.

Repossessions should never be a “matter of routine”, Mr Flanagan said, and “every effort should be made to ensure dialogue between the financial institutions and the individual involved”.

“Every person who takes out a mortgage must be aware of, or made aware of, the consequences, and the ultimate consequence, however sad that may be, is repossession for inability to pay.”

Mr Flanagan said he wanted to pass legislation this year to close a “gap” in the law that means private security workers executing court orders do not have to be registered with the independent Private Security Authority (PSA).

This is a strengthening of the current system whereby the PSA, under its “fit and proper guidelines”, has the discretion to decide whether to issue a licence to a person with a criminal record.

A group, chaired by a senior official in Mr Flanagan’s department, is reviewing the regulation of operators enforcing High Court orders and is expected to report by the end of the month.

“There have been instances in recent times where banks have employed private security people to assist in the execution of the court order,” the Laois TD said. “I am concerned at reports that those involved are not appropriately or adequately regulated.”

He said that while he did not want to pre-empt the anticipated report, the public must have confidence in how the private security system operates.

“The principal means by which confidence can be assured is registration and if there are penalties for non-registration; and that only suitable persons of good character are employed,” he added. “In other words, no criminal convictions. Good character would involve a number of facets but, in particular, I would be concerned that there would be no criminal record on the part of anyone.

He has a “general concern” aside from just those enforcing court orders.

“It is a concern I would have in respect of anybody operating in the security industry, be they a door person or a nightclub or whatever.”