‘It’s Sinn Féin against the rest’: NI Executive in conflict over coronavirus 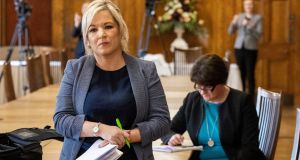 Newly back in existence, the Northern Executive is riven with tensions over the battle against Covid-19, with Sinn Féin Ministers accused of ganging up against the rest and Sinn Féin in turn robustly defending their belligerence.

Every working evening Monday to Friday First Minister Arlene Foster, of the DUP, and Deputy First Minister Michelle O’Neill, of Sinn Féin, deliver press conferences, with the press absent from the room but watching on video.

Whatever about their inner feelings, Foster and O’Neill manage to keep a lid on their differences when at the podium. But elsewhere the steam is beginning to pop the lid off the pot.

Several political and other sources contacted over recent days have confirmed that relationships are dreadful within the five-party Executive. “For Sinn Féin it’s a case of four parties bad, one party good,” says one unionist source.

There was reasonable harmony at the outset of the crisis, but discordant notes appeared quickly after the Republic announced the closure of schools on March 12th and Northern Ireland did not follow.

Speaking that Thursday evening, O’Neill, standing with Foster, stood by the North’s decision not to close, saying Ministers were being guided by the science.

However, she changed tack in the days following, demanding an immediate shutdown. Her action led to inevitable unionist mutterings about O’Neill being instructed by “shadowy” Sinn Féin backroom forces.

Six days later Foster announced schools would close on March 23rd. “It all boils back to the schools. That’s when all hell broke loose, and Sinn Féin have been hyperactive since then,” says one source.

He describes a recent Executive meeting where Sinn Féin ministers “went on the attack. They were saying things like Robin Swann [Ulster Unionist Party, Minister for Health] wasn’t up to the job; that Diane Dodds [DUP, Minister for the Economy] was too slow to act; that Peter Weir [DUP, Minister for Education] and Naomi Long [Alliance, Minister for Justice] were not up to the game; and that Nichola Mallon [SDLP, Minister for Infrastructure] wasn’t standing her ground against the other [non-Sinn Féin] Ministers.”

“It was as if Sinn Féin was trying to take total control,” he adds.

Sinn Féin does not greatly demur from this characterisation of events. It argues that the North and its Executive and civil service are not acting competently and should be following the example of the South.

Unionist and Alliance sources say it is now “Sinn Féin against the rest”, with the republican party “throwing their weight around”.

During Monday’s Executive meeting, O’Neill was particularly critical of Alliance Party leader Naomi Long but “Naomi gave as good as she got”, effectively telling her “to get stuffed”.

An early Covid-19 case in Northern Ireland provoked a row between Foster and O’Neill. The patient was sent to a hospital in Newcastle in England for specialist care, according to the source.

O’Neill complained he should have gone to Dublin. Foster politely but emphatically told her the location of the hospital did not matter but rather the level of care.

The issue of British soldiers being brought in to assist with, for instance, building special field hospitals has further exacerbated tensions at the Executive table.

Minister for Health Robin Swann has stated that if needed he would bring in the British army and the Irish Army to assist, if that would help. However, Sinn Féin is absolutely opposed to the British army having any role.

“In this situation that shouldn’t be an issue,” says one senior unionist source. “For instance a few years ago no one thought twice about Irish Army helicopters coming in to feed cattle caught in the snow in Co Down. This shouldn’t be a political issue.”

O’Neill’s announcement on March 20th that three days’ pay docked from striking healthcare workers would be reimbursed has created sores, too, with unionists accusing her of “a solo run”.

“She didn’t tell Arlene, and the point here is that what she announced is against the law, and if that is to happen, new legislation will have to be introduced,” the source says.

Given the need to put forward a united front, Foster said nothing, but the action rankled.

Tensions grew, too, after last Tuesday’s meeting by video of the Border at the North South Ministerial Council conference. O’Neill issued a press statement through Sinn Féin’s press office ahead of an agreed collective Executive statement.

In the Sinn Féin release O’Neill was described as Deputy First Minister and also as “joint head of government” – the emphasis and perceived need for the additional title also seeming to point to the strain between her and Foster.

In it, O’Neill wrote of how chief medical officers North and South would sign a “memorandum of understanding formalising co-ordination and co-operation between the Irish Government and the Executive this week”.

However, such co-operation is already in place between public health officers on both sides of the Border, and the memorandum merely formalises this. O’Neill’s wording is “just about presentation” to suit Sinn Féin, says a source.

Meanwhile, unionists complain that Sinn Féin Ministers are too focused on dealing with Dublin and are not taking part in the regular video-linked Cobra meetings chaired out of London by UK prime minister Boris Johnson.

In these, representatives of the British government and from Scottish, Welsh and Northern Irish devolved administrations discuss the crisis. That charge is “BS”, however, according to a senior Sinn Féin source.

One of the major issues of disagreement is over the Sinn Féin demand that all “non-essential” businesses and factories should close. Sinn Féin politicians complained that Ulster Carpets in Portadown, which employs about 600 people making luxury carpets, should close.

The company in turn said it was observing social-distancing practices for its employees, had stringent cleaning systems in place and was allowing a number of employees to work from home.

One unionist source says this is also causing Executive grief. He claims darkly that because Ulster Carpets is based on the Garvaghy Road – focus of the violent stand-offs between the Orange Order and local nationalists during the mid-1990s and early 2000s – Sinn Féin has some special political animus against the company and that the comments are not just about worker welfare. The source says it is important to protect these jobs.

Rejecting the charge, a senior Sinn Féin source says the party has no “political” issue with Ulster Carpets but is adamant the company should be shut. He is dismissive of the idea that social-distancing measures operating at Ulster Carpets are enough to safeguard employees.

“Who needs a new carpet at times like this? It seems insane to most people”

What about people coming to work there in buses or vans who are “incubators for the virus”, he asks. “Who needs a new carpet at times like this? It seems insane to most people.” Lives take precedence over jobs, he adds.

More generally, he says Northern Ireland should be looking to Dublin, rather than across the water because in the Republic there is more testing, more concentration on getting in enough personal protective equipment and more focus on World Health Organisation advice, whereas London is taking a more laissez- faire attitude.

“It is us being handcuffed to a British approach where Britain seems to be putting more store on saving the economy than on saving lives,” he says.

The Sinn Féin figure also mentions how some unionist commentators have accused the party of failing to demonstrate Executive unity. “With respect, we are not looking to do meaningless displays of unity on flawed approaches when lives are at risk,” he says. “It is just that simple. Where and when we need to call it out, we’ll call it out.”

“This is not a time to be messing about with party politics,” he continues. “Behind the scenes we have had to take people on but I know we are doing it for the right reasons.

“We won’t always get it right in terms of our approach, but believe you me, it is driven by trying to cut down the casualties this is going to inflict. The virus does not recognise North or South and it doesn’t recognise Ardoyne or Shankill, or anywhere else.”

This isn’t about the DUP and others following London and us following Dublin. This is about trying to follow the best medical practice

He adds that “the bulk of our efforts behind the scenes for days and weeks now has been to try to bring people to what are common-sense positions on a shared island”.

“This isn’t about the DUP and others following London and us following Dublin. This is about trying to follow the best medical practice regardless of where that comes from. It is not a ‘Brits Out’ thing. It is not about scoring points over the DUP or the UUP,” he says.