Coronavirus: More than 400 nurses restored to register since crisis began

A Government spokesperson has said that while not all coronavirus test centres are open the HSE has a sufficient amount of centres open to meet current demand. Video: RTÉ 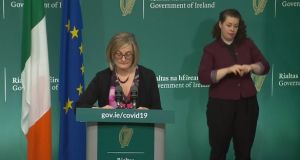 More than 400 nurses and midwives have been restored to the professional register since the outbreak of the Covid 19 crisis after their applications were fast-tracked and registration fees were waived.

At the daily Government briefing on the State’s response to the pandemic, a spokeswoman said that some 432 nurses and midwives who responded to the ‘Be on Call’ campaign have already had their registrations processed.

She also said the nurses trained in the EU or in the UK will be facilitated with swift no-fee registration as long they they are already registered in their own country.

The spokeswoman, Liz Canavan of the Department of An Taoiseach, said the Department of Foreign Affairs has been in regular contact with the 12 Irish citizens aboard a cruise ship which has seen a coronavirus outbreak.

The MS Zandan is currently en route to Fort Lauderdale in Florida. Four passengers on the ship died from the disease. It is not know if any Irish citizen aboard has contracted Covid-19.

Ms Canavan also disclosed that 30,000 employers have applied for Revenue’s temporary wage subsidy scheme, that will allow companies to keep their workforce on the payroll during the crisis. Some €34 million has been spent on the scheme cumulatively since its announcement, she said.

It was also revealed that the remaining €16 million in unclaimed National Lottery prize money, from when the company was still run by An Post, will now be diverted into health spending.

The briefing also heard that court services will continue during the crisis but at a reduced level. The court service will reduce the need for people to appear in court and there will be more remote hearings.

In relation to custody proceedings involving children, the spokeswoman said “Covid 19 cannot be used as an excuse to avoid a court order.”

She said parents must work together to keep an order in place. Referring to some concerns about travelling when parents live in different locations, she said alternative contacts could be explored including phone calls and Skype. She said mediation services were also available.

“Parties should remember that the welfare of the child is paramount,” she said.

Special Needs Assistants are to be redeployed to other areas of the public service on temporary assignments, said Ms Canavan.

She said they could bring “much needed skills to other services” and would be in a position to give “great support to the national effort”.

She did not specify to what areas they would be redeployed.

Ms Canavan said that libraries, in conjunction with the Irish Writers Union, would be providing spring into Astrodome’, a series of online story sessions for children which will be available soon.

A podcast to help children and young people to learn relaxation techniques will also made available on Soundcloud. It has been prepared by the National Education Psychology Services to help children overcome the disruption to normal activity and any associated stress or anxiety.

It has also been announced that fuel allowance payments will be extended a further four weeks to pensioners and disadvantaged households. The winter allowance usually finishes at the end of March.

Ms Canavan addressed public concerns around testing for Covid-19 by saying that while not all test centres were open on Wednesday, there would be a sufficient number open to meet the current level of demand.

She said there was a plentiful supply of swabbing kits but then referred to difficulties obtaining other materials, including reagents. She said this was a global problem.

Two more laboratories, the Public Analysis Laboratory, and a Department of Agriculture laboratory, have now come on line for coronavirus analysis.

She said that priority testing would continue for healthcare workers and patients in hospital. She said however contact tracing would be carried out for high risk groups in advance of test results becoming available.

The Government is also expected to look into an anomaly where tenants in rent-a-room or digs accommodation do not have the same protections as other tenants. Ms Canavan said landlords in those situations should avoid using Covid 19 period to end tenancy arrangements.

She said additional beds had been procured in hotels in Dublin, Galway and Cork for those have applied for asylum in Ireland.