Vaccinating for virus, industry insiders say, is utterly different to what has gone before

The World Health Organisation's Dr Michael Ryan says vaccines will not mean zero Covid-19, but they will be an additional "powerful tool" for controlling the virus. Video: WHO 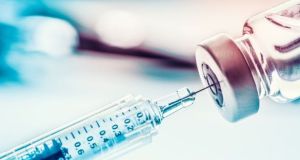 Under massive pressure, faced by a novel threat and an equally novel solution, the State’s systems for planning and managing mass immunisation programmes are to be tested like never before. Photograph: iStock

Before vaccines, pandemics ended very differently. There was, explains a senior Irish drugs industry expert, a “social end to a pandemic”. Either a virus mutated, becoming less harmful, or it brutally worked its way through a population that had stopped trying to contain it.

“The Black Death didn’t end in one day, people just got fed up of staying in their houses,” observes the industry figure. Today, however, it is not the 14th century, and society’s attitudes to managing and ending pandemics have changed.

Covid-19 vaccines are now centre stage, with up to 10 expected to be approved in Ireland, coming in on a tide of extraordinarily encouraging data about how effective they may be. But the suppression of the virus brings new challenges.

Vaccinating for Covid-19, industry insiders say, is utterly different to what has gone before. Every year, Ireland vaccinates hundreds of thousands against the flu. However, that process is, by comparison, straightforward.

The State agrees a tender with one company, and vaccines are flown in and distributed around the country through GPs and pharmacies. There are no onerous storage requirements, it is administered in one dose, and there is usually ample supply.

Covid-19 vaccines are different. For starters, there’s not just one; Ireland is party to six bulk-buying contacts negotiated by the European Union – which, if the vaccines are approved, could see upwards of nine million doses for the State.

“[There are] six vaccines, which may or may not all get authorisation; if they do they’ll come on stream at different times, [and] different vaccines may be more suitable for different populations,” a senior political source involved in planning said.

Everyone accepts that this vaccination programme is hugely complex, unlike anything before. But what does that mean? Some vaccines are based on novel technologies – specifically the messenger RNA method used by BioNTech/Pfizer and Moderna.

They must be stored at super-low temperatures – minus 80 and minus 20 degrees respectively. Others, those made by Belgian company Janssen and Oxford/AstraZeneca, are more traditional, and can be stored at fridge temperatures.

The latter vaccines can “plug into” the State’s normal vaccines distribution system – the National Cold Chain Service, managed by United Drug for the HSE. However, the first ones available are those demanding ultra-low temperatures – BioNtech/Pfizer and Moderna.

Pfizer says there are three options for storing its vaccine: ultra-low temperature freezers that can store for six months; a Pfizer-made “thermal shipper” that can store doses for up to 30 days if dry ice is added every five days; or they can be stored for up to five days in normal fridge conditions.

Nine ultra-low temperature freezers bought by the HSE have been delivered in recent days to boost already-existing cold storage. Is this enough? We will see. Even if it is, the temperamental nature of some vaccines will mean that they will have to be given to patients differently than before.

Multiple sources on both the industry and State side say that mass vaccination centres will be needed for the super-cold options, or mobile units that will be sent to set up in hospitals, or care homes. The Defence Forces may be involved, too.

Who gets the vaccine first?

This week, the National Immunisation Advisory Committee (NIAC) prioritised hospital and nursing home workers, the elderly and those with underlying conditions in a letter to the National Public Health Emergency Team. Even within these groups, some will get the vaccine first.

There are some “known unknowns”, too. Some vaccines may be more or less effective for some age groups, or for those with underlying conditions, so the State may have to adjust mid-flight. Also, the Government has yet to decide how much of the population it wants inoculated.

The complexity does not end there. Given the speed of development, these vaccines do not come in pre-packaged syringes. Instead, they will come in bulk: “That raises the question of whether we have enough needles and syringes,” says a well-placed industry source.

The HSE must also train enough vaccinators, but this is more complicated than it sounds, since some vaccines require two precisely-timed doses. Here, the Government is confident, but some in the drugs industry have doubts: “You can’t assume people will understand,” said one executive.

Ireland does not have a single national immunisation registry, either, which could make it more complicated to give multiple doses, since it must be clear who has got a first vaccine shot and when they should get a second.

“[Today], we’ve no idea who gets vaccinated; we know who is meant to, we know the priorities, but generally because there’s ample vaccine available, nobody’s too bothered. We don’t have the infrastructure in place that we can just plug in and use for the Covid vaccine,” said one executive.

Such a system would be “important”, though decisions are still be made about whether a fully developed system must be put in place ahead of the immunisation programme, “or whether a satisfactory interim solution” could be adopted.

Such a database, sources say, would trace bad reactions to vaccines among events, if they happen. And they would do so in real time, perhaps allowing other people to be treated with different vaccines if issues emerge.

Meanwhile, there is the issue of compensating those who do react poorly to a vaccine, if there are any. While there is no reason to expect a higher than usual number, the publicity surrounding the rollout is likely to spur claims.

The Government, say a multitude of sources, now needs to introduce its promised no-fault compensation scheme before such claims materialise, or else it risks spending years and tens of millions of euro bogged down in litigation.

The Opposition in the Oireachtas is alive to these frailties. “We still use charts in hospitals, so how are we going to ensure that we can manage every single human being in this country [for vaccination]”, said Labour leader Alan Kelly during the week.

As reported by The Irish Times on Friday, the issue of Brexit has also been raised with drug manufacturers at length by the Departments of Transport and Health, concerned about the impact of potentially losing the landbridge across the United Kingdom.

All these issues, and more, are being examined by the State’s Covid-19 taskforce, led by Prof Brian MacCraith. A huge variety of State agencies are represented on it, from the HSE to the Defence Forces to IDA Ireland, supported by external logistics experts.

Though the taskforce has been the focus of headlines, the HSE’s National Immunisation Office and the independent NIAC are key players, concentrating on supply chain logistics, staffing, monitoring and reporting, and information technology.

Given the unprecedented public attention on the rollout, and the complexity of the mobilisation required, political pressure is inevitable. Mr Kelly has already called for the appointment of a Cabinet Minister directly responsible.

Errors or delays are likely to carry a high political price. “This isn’t something that we can be laissez-faire about,” Mr Kelly said. “Everything has come a lot quicker. We can’t have dithering here,” he said. “This needs to be dealt with in an executive way, quickly.”

Under massive pressure, faced by a novel threat and an equally novel solution, the State’s systems for planning and managing mass immunisation programmes are to be tested like never before.

Having battled the disease, is Ireland ready for the vaccine?