Thousands book nights out across country as Covid-19 restrictions eased 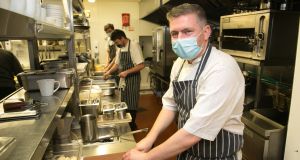 Pent-up demand for a meal in a restaurant has seen a surge of bookings in recent days with the availability of tables for the peak hours between 7pm and 9pm extremely limited across the country as the sector starts to re-open after a six-week shutdown.

According to the OpenTable restaurant booking engine restaurants that will be able to accommodate a table of six people for dinner at 8pm on Saturday or even within two hours of that time, were few and far between.

The site said that thousands of bookings across hundreds restaurants in Irish towns and cities had been made in the last 24 hours suggesting that a serious scramble for Saturday seats had begun.

A ring-around restaurants also pointed to a huge appetite for a meal out this weekend.

Pichet on Dublin’s Trinity St said it was fully booked. “There has been a mad scramble for seats in the last weeks and we have quite a few groups of six,” The Irish Times was told when it looked for booking for Saturday night on Friday morning.

It was the same across the river in the Winding Stair in Dublin 1. “I am booked out, pretty much,” a spokesman said.

“I do have one table at 9:45 and a couple of early ones but everything else is chockers. We have been waiting all year for this it will be a busy couple of weeks but it will be great.”

Tapas de Lola on Camden St said it was “booked out pretty out pretty much every Friday and Saturday between now and Christmas and only have a few of the 5pm and 9pm sittings mid week available.

Fade St Social was similarly booked out for Saturday night with some availability on subsequent days while it was the same story in the nearby Brasserie 66 on the capital’s South George’s Street.

Ard Bia in Galway said it was “fully booked” for Saturday night. “People were lovely and the minute the restrictions were lifted they started getting in touch,” a spokeswoman said. It was the same story in Cava where there was no availability on Saturday night and a limited number of early and late sittings on Sunday.

It was the same story in Cork City while demand in Kilkenny was equally high.

The general manager of Dublin’s Marker Hotel Charlie Sheil said he was looking forward to welcoming diners back this weekend. Safety will remain our priority and we are opening in a very measured fashion,” he said.

He said there was “limited availability on Saturday” with most of the tables already taken by hotel guests.

“People are able to come out and sit in safe environment and be looked after by people who are properly trained. Everyone is delighted to be back and we are really looking forward to the next few weeks,” he said.

He added that the hotel was taking bookings for dining in its bars and would also welcome walk-in guests. “I think there are a lot of local people just wanting to get out and have some dinner. It is not going to be like last Decembers but it will be a good month,” he said.

The head of the Restaurant Association of Ireland Adrian Cummins was similarly upbeat ahead of what is likely to be the busiest weekend in the hospitality centre for almost a full year.

“This Saturday night was always to be the prime night with all the pent up demand. Restaurants have been closed for six weeks and for longer in Dublin so the demand was always going to be there,” he told The Irish Times.

He pointed out that restaurants would only be able to around two thirds of the diners who they would normally serve and restrict parties to groups of six or less. “There will be no big groups this year but I don’t sense any appetite for office parties people are looking forward to going out with a close circle of friends maybe three times before Christmas.”

He said he had also noted a degree of nervousness. “We want to do the right thing so that we remain open into January and February,” he said.

He pointed out that the sector have been through this before. “This is not our first rodeo and we know we can do this and we can do it safely. When we were open earlier this year staff didn’t get Covid and we know that if everyone does what they are supposed to do and customers adhere to the guidelines we will be okay.”

He suggested that the “finishing line for us is the roll out of the vaccine”. That is when people “can start to get their lives back to normal. This has been traumatic for everyone, people who have lost loved ones, lost jobs and had their world turned upside down. Everyone wants to see the end of it.”