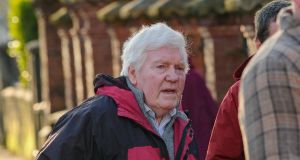 Denis Carey of Garden Field, Dromcollogher, Limerick, pleaded guilty to inviting a child to engage in a sexual act at a public toilet that would have involved the commission of an offence against the child. Photograph: Cork Courts Limited

A 79-year-old retired bus driver with no previous convictions who propositioned a secondary school boy for sex in a public toilet in north Cork has received an 18-month suspended sentence.

Denis Carey of Garden Field, Dromcollogher, Limerick, pleaded guilty to inviting a child to engage in a sexual act at a public toilet that would have involved the commission of an offence against the child.

Garda Yvonne Cashman told Cork Circuit Criminal Court that at 4.06pm on April 30th, 2019 a teenage boy in North Cork went to use a public toilet in his town.

Carey asked the boy to participate in oral sex and made sexual gestures. The boy ran out of the toilets and went home.

However, 30 minutes later the boy told his father what had occurred. The father and son returned in their car to the public toilets to find that Carey was still parked in the area.

When he saw the boy he moved his car and started to drive away. The father and son followed him for a period.

Carey made a voluntary statement at a North Cork Garda station where he denied any wrongdoing. However, he said he thought the boy was in the public toilet for sex.

Upon his arrest on July 21st, 2019, he admitted asking the child for oral sex. However, he denied making sexual gestures.

Defence barrister, Donal O’Sullivan, said his client had never been before the courts. He stated Carey had entered a guilty plea at the earliest opportunity.

He said Carey’s admission of guilt was of particular value in that it meant the teenager didn’t have to give evidence at a trial.

He told Judge Seán Ó Donnabháin that the father of four was in good health. However, his wife has health problems and relies on him.

Mr O’Sullivan said what had occurred was a “huge shock” and a source of anguish to his family but they were doing the best they could to support him.

He told the court that a medical report indicated that Carey might a suitable candidate for supervision by the probation service.

Mr O’Sullivan said his client was hugely remorseful if not very insightful in terms of his behaviour.

“His biggest problem was his insight. He doesn’t have a lot of insight. But he never intended to cause hurt or harm.”

He said the fact his client would find himself on the Sex Offenders Register and the subject of adverse publicity was “significant”. However, he emphasised Carey had faced up to what he had done.

Judge Ó Donnabháin said there was a level of preparedness on the day as Carey had been “around and about the location for a while.”

At a hearing last Friday Judge Ó Donnabháin remanded Carey in custody for a week. This was to allow his barrister ascertain if the pensioner could be supervised by the probation service in the event of a fully suspended sentence being imposed in the case.

Barrister Donal O’Sullivan today said the appropriate supervision and sex offenders’ programme had been put in place for Carey.

Judge Ó Donnabhain said the crime was an opportunistic one. He told Carey he had remanded him in custody for a week in order to bring the seriousness of the offence home to him.

He jailed Carey for 18 months, suspending the entirety of the sentence. Carey will be listed on the sex offenders’ register.