Public urged not to ‘veer off course’ as hospitality sector reopens 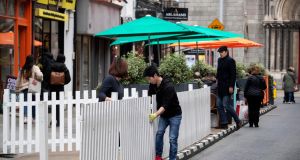 It is crucial that adherence to public health guidelines does not “veer off course” as indoor dining in restaurants, cafes, and gastropubs resumes on Friday, a senior civil servant involved in the Government’s Covid-19 response has said.

Businesses should take the decision to close if they are concerned about Covid-19 safety, Elizabeth Canavan, Department of Taoiseach assistant secretary general told a press briefing on Friday.

“If you’re a business you know what to do and if you’re having difficulty controlling the situation, do the brave thing, look for help, close your business if congregation is getting too much,” she said.

The advice was issed after it emerged fridges to store doses of coronavirus vaccines had arrived in Ireland ahead of an expected January roll out. HSE chief executive Paul Reid tweeted a photograph of the fridges adding: “We’re preparing for the #COVID19 vaccine roll out in Ireland. At the HSE National Cold Chain Centre, we have received and are currently commissioning & validating a consignment of 9 x Ultra Low Temperature Freezers for storage of the vaccines at -75 degrees.”

Meanwhile, Ms Canavan said there had been “anecdotal reports” of some pubs serving takeaway drinks taking the decision to shut, due to concerns over numbers gathering outside the premises.

An Garda Síochána would be conducting 100 checkpoints a day, with patrols in major cities and busy retail locations in the run-up to Christmas, she said.

The guidance for restaurants and pubs that serve food was clear that there could be no “multiple bookings” of several tables by large groups, the senior official said.

We're preparing for the #COVID19 vaccine roll out in Ireland. At the HSE National Cold Chain Centre, we have received and are currently commissioning & validating a consignment of 9 x Ultra Low Temperature Freezers for storage of the vaccines at -75 degrees. @HSELive pic.twitter.com/ooGUc9OSQo

“I’ve spoken to some of the restaurateurs myself, it is very difficult for them, the responsible ones are saying we’re not taking multiple bookings,” she said.

“This can’t be a de facto Christmas party, you will not be allowed to leave your table, swap seats,” Ms Canavan said. There was also some concern over potential large numbers gathering in the smoking areas of gastropubs, which had to be monitored by businesses, she said.

The first weekend of the hospitality sector reopening would “set a marker” for behaviour over the Christmas period, so it was crucial people were responsible, she said.

“We don’t want to see small infractions being amplified in the media and then causing problems for the whole sector,” she said.

The number of people claiming the Pandemic Unemployment Payment (PUP) has dropped as the country continues to emerge from lockdown.

This week 351,000 people received the PUP, with 6,800 people ceasing to claim the payment in the week up to 1st December. Some 4,500 of these had indicated this was because they had returned to employment, Ms Canavan said.

In addition to the weekly PUP payment, 286,000 people received an additional arrears payment this week.

This was due to previous delays in processing the large number of PUP applications, or payments for arrears in cases where a claim had been held up due to incomplete or incorrect information being supplied, she said.

The Government’s high-level Covid-19 vaccine taskforce was due to submit a plan for the rollout of a vaccination programme to Taoiseach Micheál Martin next Friday, December 12th.

Ms Canavan said there had been some “speculation” about whether some type of immunisation passport would be introduced, to establish if someone had received the vaccine.

Until there was more information about what vaccines would be available it was “very difficult” to answer questions on whether such a passport scheme would be introduced in Ireland, she said.

Discussion around that proposal were “weeks away from where we’re at,” with officials currently focusing on the plan to roll out the vaccine, when one is approved by regulators, she said.