Irishman has until Friday to leave US or face jail 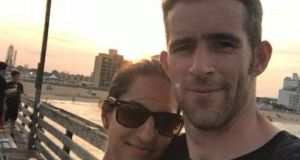 Keith and Keran Byrne met the week Keith was due to return to Ireland having outstayed his visa.

Irishman Keith Byrne, who is facing deportation in the United States, has beengiven leave until Friday to sign deportation documentation or face jail.

Mr Byrne’s brother, Greg, said Keith called him yesterday from Pike County detention centre and that an ICE official presented him with a deal.

Father-of-three Keith Byrne (37), from Fermoy Co Cork, was on his way to work – a painting and decorating business he built up over the last five years – in Montgomery County, outside Philadelphia, last Wednesday morning when he was pulled over.

US Immigration and Custom Enforcement (ICE) officers in unmarked cars arrested him, before he was sent to Pike County Correctional Facility, a prison in Pennsylvania, where he is being held since.

Speaking to RTÉ’s Morning Ireland, Greg Byrne said his brother has until Friday to sign documentation that would give him a passport to leave the country, but ban him from entering the US for five years.

After this time has passed, he would then have the opportunity to reapply for visiting rights to the United States. However, that application does not give him a guarantee that he is allowed to return.

Failure to sign the documentation, could result in up to four years in jail.

Mr Byrne said he was told he would also be brought to another jail and it would take more than a year for his case to be heard in front of a federal judge.

The Byrne family is pleading for intervention from “the powers that be” to give discretion considering - what they say - is Mr Byrne’s contribution to American society.

“People see how hard he has worked. He is living the American Dream, but he worked hard for it.

“I know he did wrong. He started with a holiday, but he fell in love. He didn’t go there for a wife, he went for a good time.”

Greg Byrne also spoke about the effect the situation is having on Keith’s family.

He said Keith was very upset by the news, especially after a conversation yesterday with his son Gabriel from the detention centre.

“He could sense from Gabriel’s voice that there was a change in his voice and he could sense the loss and he was very upset over that.

“He believes he has destroyed their lives.”

The family says this is an exceptional case - that he had his own business, paid taxes, was actively open and honest about his situation with officials.

His sister, Melinda Byrne, also said that the whole family cannot just simply all move back to Ireland due to family dynamics as Mr Byrne has a stepson, Ezra, in the US.

“I mean Ezra will be separated from his father and his family in the United States. Keith has reared him since he was two years old. So it’s not just a simple case of it’ll be easy to return to Ireland with the two children. That causes difficulties for Ezra and it’s dividing him from his father and extended family.”

American congressman Brendan Boyle has said that he is hopeful that the deportation of Fermoy man Keith Byrne can be delayed to buy some time to work on a more “permanent solution”, but he said he cannot go into details for legal reasons.

Congressman Boyle told RTÉ he is not necessarily optimistic that “we are going to be able to win but I am hopefully that we have a few plausible avenues”.

Mr Boyle also criticised the Trump administration for taking such a stance on immigration and targeting “a law abiding citizen who works hard and pays taxes” and he said the action does nothing to improve the United States.

“Speaking as American citizen, not even a member of Congress, what exactly does this achieve? This doesn’t Make America Great Again.”

Melinda Byrne said her brother had originally gone to America in 2007 on a US Visa Waiver Programme but had overstayed that by a number of months and was planning to return to Ireland when he met Keran the week he was planning to leave and decided to stay on.

Mr Byrne later set about trying to regularise his position in the US by paying a financial contribution for his failure to abide by the visa programme.

However, in the course of attempting to regularise matters, he volunteered information to his lawyer that he had a conviction in Ireland for simple possession of cannabis and that was included in his application for citizenship.

Ms Byrne told The Irish Times her brother, while applying for US citizenship in 2010, following his marriage to Keran in 2008, had obtained a social security number, paid taxes and obtained a driving licence and had been in contact with ICE on a regular basis.

However, he had recently lost an appeal to grant his residency because of his two Irish drug convictions for simple possession, is father said at the weekend, and is now being held in the Pike County Correctional Facility, a prison in Philadelphia, facing deportation.

Ms Byrne said one of the challenges facing her brother is that because he went to America on the US Visa Waiver Programme, he does not have a right to appeal the decision to a US immigration judge, save in exceptional circumstances.

Ms Byrne said the family is not asking the Government to seek citizenship as they “fully accept there is a process that has to be gone through” for that.

“All we are asking is the chance for Keith to appeal his deportation before an immigration judge so that he and his family are not split up.”

If the deportation goes through, Mr Byrne will be removed him from his wife, Keran; stepson, Ezra (13); daughter, Leona (6); and son Gabriel (4) with whom he set up home, buying a new house just last February, said Melinda Byrne.