Battle of Britain pilot at 100: ‘The only advice I can give to people is be Irish’ 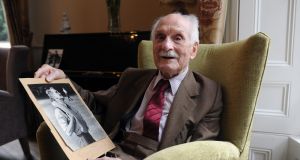 John Hemingway, 100 years old on July 17th, who is the only surviving Irish Battle of Britain pilot veteran, pictured with a photograph of himself aged 20 in 1939 just after the outbreak of the second World War. Photograph: Aidan Crawley

John Hemingway, the last of 36 Irish pilots who fought in the Battle of Britain and the only remaining RAF veteran of the Battle of France, is celebrating his 100th birthday on Wednesday.

After an eventful life, having survived being shot down four times during the second World War, the Dubliner is modestly reluctant to offer advice on how to achieve this mighty milestone.

He lives a quiet life in south Dublin, having returned to Ireland in 2011 after several years in Canada with his daughter. His decision to return was “one of my absolute correct decisions. I was always going to come back”.

Born in St Kevin’s Gardens in Dartry on July 17th, 1919, he attended St Patrick’s Cathedral Choir School where he was “an unsuccessful choirboy”. He later attended St Andrew’s College, then located on St Stephen’s Green.

After being accepted into the RAF, he began training in Brough, Yorkshire, in January 1939. Having completed flight training school, Pilot Officer Hemingway was posted to No. 85 Squadron in Debden, flying Hurricanes. When war broke out, his squadron was sent to Rouen in northern France to provide air support for the British Expeditionary Force.

On May 11th, 1940, days after the Battle of France commenced, Hemingway downed a German Dornier Do 77 light bomber. On the same day, he himself was brought down by German anti-aircraft fire, but landed safely.

Such was the extent of the losses that his squadron was withdrawn from France after a week of fighting. However, he flew further sorties, including air support missions over Dunkirk during the evacuation.

Hemingway was on the frontline during the Battle of Britain, a campaign which decimated No. 85 Squadron. He was shot down twice in August 1940. The first instance was while intercepting Junkers Ju 88s about 32km off Clacton-on-Sea in Essex. He was in the water for almost two hours before a rowing boat rescued him.

Over Eastchurch in Kent during an attack on Dornier bombers, his aircraft was damaged by tail gunners and he bailed over Pitsea marshes. His Hurricane P3966 plummeted from 5,000m and was buried in the soft, boggy soil of the marshes.

By September 1940, No. 85 Squadron had lost 11 pilots in action and had to be withdrawn. Hemingway was awarded the Distinguished Flying Cross in July 1941, but the battle had taken its toll on the young pilot. His commanding officer, Peter Townsend, famed for his later romance with Britain’s Princess Margaret, and described by Hemingway as a “first-class wartime leader in a fighter squadron”, was also good at recognising the signs of battle fatigue. Hemingway was rested, with light duties, for two years.

In his new role as a flight controller he directed fighter air traffic during the Normandy invasion, but was keen to get back flying. He was posted to Italy in September 1944 as the leader of No. 43 Squadron, flying Spitfires.

At the time German forces were retreating, and “we were helping them with their retreat”, Hemingway added. It was during this campaign he was shot down for the fourth and final time. During a strafing attack on a German motorised column near Ravenna, his Spitfire was hit by ground fire and he bailed behind enemy lines. After being cared for by Italian partisans, a young girl from the locality guided Hemingway, disguised in peasant clothing, past German positions to the safety of Allied lines. Hemingway says he was more frightened for the life of that small child than his own.

After the war, he served as a staff officer in the Middle East, acted as station commander of RAF Leconfield in Yorkshire, and then senior staff officer at Nato headquarters in France, before being posted to the air ministry. He retired in 1969.

In March of this year, a team of aviation archaeologists unearthed fragments of Hemingway’s Hurricane P3966. Parts of the aircraft were perfectly intact, the soil of the marshes having acted as a preservative, among them the spade grip joystick with the gun button switched to “fire”.