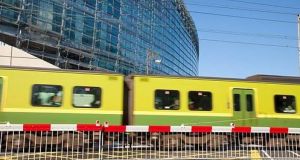 One in six of all weekday Dart journeys are made between 8am and 9am. Overcrowding is worse on north side services. Photograph: Getty Images

Irish Rail is to try to persuade Dart commuters to stagger morning rush-hour commuting journeys in a bid to reduce overcrowding problems.

On Monday it will begin a campaign to encourage passengers to make “even small changes in habit”, promising that they could make major differences to the quality of service provided.

A new website, Peaktime.ie will allow Dart users to check for less crowded trains. One in six of all weekday Dart journeys are made between 8am and 9am. Overcrowding is worse on north side services.

“Peaktime.ie will show commuters who are in a position to alter commuting times how a change of even 10 minutes in some instances will find quieter trains,” a company spokesperson said.

Over the coming months the campaign will spread to cover all commuter trains in Greater Dublin. It has begun now, said Irish Rail, because September is the busiest period when third-level students go back to college.

For now the campaign will concentrate on morning journeys because the evening crushes are not as bad. On average 14,000 passengers travel on the Dart between 8am and 9am, compared with 10,000 between 5pm and 6pm.

Last year the Dart broke records, carrying 20.9 million people – up 10 per cent on 2017 figures – with forecasts estimating numbers will rise further to 22 million this year.

Timetables were changed a year ago to increase Dart services between Bray and Howth Junction, with trains promised every 10 minutes in both directions between 6.50am and 8pm.

The Peaktime campaign is about getting the best use out of the existing 144-carriage Dart fleet because new carriages will not be ready to come into service before 2022, says the company.

An order for 41 new carriages is due to be placed within weeks, while a separate order for electric and battery-electric powered carriages will see 600 of them delivered over 10 years from 2024.

Between 50 and 100 of these new carriages will be dedicated to Dart services, while the rest will be spread around increasingly busy commuter services in the Greater Dublin network.

The extra carriages will especially boost capacity because it will allow more eight-carriage services, which is frequently currently not the case on peak-time services.

“In addition, the finalisation of the city centre signalling will also facilitate a modest increase in frequency,” added the Irish Rail spokesman.

However, the National Transport Authority has abandoned plans to buy second-hand carriages internationally as a short-term overcrowding fix. “It is not being progressed.”

No “appropriate responses” were received to a tender offer, partly because Ireland’s railway gauge is relatively unusual and now only found in parts of Australia and Brazil.

Meanwhile, Irish Rail has announced a late-evening service from Dublin to Mullingar from September 30th. The existing 20:47 from Connolly to Maynooth will now run to Kilcock, Enfield and Mullingar on weekdays.

However, the new service sees the cancellation of the 21.40 Maynooth/Connolly service, along with minor time changes to some late evening Dart, Maynooth, northern commuter and Phoenix Park tunnel services.