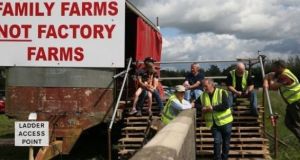 Pickets were lifted by beef farmers at another processing plant on Thursday raising further hopes that the nationwide dispute is edging towards a conclusion.

On Thursday evening, Beef Plan Movement (BPM), one of the organisations engaging with demonstrators, said it had secured the suspension of a blockade at ABP in Cahir, Co Tipperary.

Dermot O’Brien of BPM said about 70 demonstrators had left the Cahir facility on Wednesday with five remaining until Thursday.

BPM negotiators were hopeful a second facility would see an end to its blockade on Thursday night with more being lifted on Friday morning once consultations were completed.

“It’s very hard because there is no leadership in these protests so to step them down you are talking about two days (of talks) because you have different groups coming in the morning and evening,” Mr O’Brien said.

“Sometimes it has been very tense. Farmers are very annoyed. These are the immediate difficulties we are met with and sometimes we have to go to the picket lines twice.”

There were hopes that the lifting of blockades at the Dawn Meats factory in Slane, Co Meath and ABP in Ferrybank, Co Waterford on Wednesday would lead to a general end of picketing at the 20 other meat factories targeted by farmers.

However, Liffey Meats said blockades were continuing at its plants in Ballyjamesduff, Co Cavan, Hacketstown in Co Carlow and Ballinasloe in Co Galway putting 500 jobs at risk.

In a statement, the company said that the continuing blockades were having a “hugely negative impact both locally and in the surrounding companies” and there was a potential for business to be lost forever as a consequence of the continuing protests.

The company added: “Every day that goes by, we know that customers are actively and urgently looking at alternative suppliers in Europe for their beef.”

Minister for Agriculture Michael Creed urged farmers to “step away from the blockades” to allow parties reach a lasting resolution.

He said the agreement brokered over the weekend between processors and farming groups would bring not only “immediate benefits” to beef farmers but would also open up the possibility of significant structural changes for the methods of beef payments.

Speaking at the National Ploughing Championships in Co Carlow, Mr Creed said: “Ultimately I am asking (picketing beef farmers) to step away from the blockades and acknowledge there is a bigger picture here.”

Asked should processors also desist from pursing legal actions against picketing farmers, he replied: “The agreement is very clear. All legal proceedings disappear when all pickets have been dismantled. That is the prize for those that are directly impacted as well as the content of the deal, the tangible proposals that were there. There is a resolution within the deal.”

He also said the comments made earlier this week at the ploughing championship by President Michael D Higgins were welcome. Mr Higgins said farmers needed “transparency, protection and a fair system”.

“Michael D is a man of the people and an experienced politician of long standing,” said Mr Creed.

“I think his comments are welcome in this context. I appreciate they may surprise some in terms of entering into an issue that some might consider beyond his remit.

“It is an issue of such magnitude and with such impact on the role of the economy. In his interview he was asked a direct question which in fairness he answered. I have commented on some of the President’s other utterances. I have to say, in a slightly partisan way, I welcome this one,” he said.

The Irish Farmers’ Association (IFA) called on meat processors to come forward with a “strong base price” for farmers to help resolve the dispute.

IFA president Joe Healy said the issue of a base price could not be discussed at talks last weekend to resolve the long running dispute over payments made to farmers at the factory gate.

He blamed Ireland’s “flawed competition law”, saying the seven-week dispute was a result of farmers’ frustration over the price they were being paid at the factory gate for their cattle.

Mr Healy said the issue of base price had been raised in the talks last weekend though competition law prevented price fixing.

However, “the success of the agreement, on the ground, would very much depend on the factories approach on the base price,” he said.

“I would now urge the factories to re-open and to come forward with a strong base price. This would help to start the process of building some sort of trust and to get the industry up and running.”

When questioned about the issue at the championships, Taoiseach Leo Varadkar pointed to the €100 million fund created to support beef farmers through Brexit, of which €20 million is still to be drawn down.

He said he acknowledged the “enormous pressure” that 75,000 beef farmers faced, with the price at factory gates being less than the price of production. He said that situation was not sustainable.

He asked those farmers still on picket lines to withdraw and give the negotiated agreement a chance to work. He said he was also asking factories to recognise producers.

Fianna Fáil leader Micheál Martin said the issues could have been dealt with many months ago.

He said prices had been so continuously low since May that he was calling on the European Commission to intervene with a new “market disturbance fund” to compensate farmers for the large fall in prices.

He called on farmers to lift the blockade and get their cattle to markets.

Angus Beef Ireland, which represents 7,000 members, says its members are suffering financially as a result of the blockade.

Angus farmers would typically send 1,000 cattle each week to Irish and EU customers, but are prevented from selling their factory-ready animals due to the blockades.

Angus Beef Ireland managing director Gerry Smyth said: “Our members are struggling to make ends meet at present. Their cattle are going over weight and fat, and moving out of specification, which means they will lose the bonuses that are typically paid for these high-quality animals.

“These protests have gone too far, hard won customers for Angus beef may look to other markets if they can’t buy in Ireland, which would do long-term damage to our members.

“No one is denying that times are tough for beef farmers, but these ongoing protests are damaging to everyone. It’s time to find a solution and allow time for the deal agreed over the weekend to try to work.”