Fresh search under way in Cavan into torture of Quinn executive

Derrylin priest appeals to those responsible to ‘stop the violence now’ 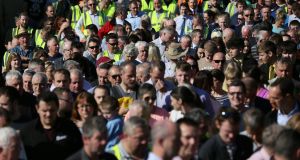 Workers from Quinn Industrial Holdings gather at Head Office in Derrylin on Friday for an event to show solidarity with director Kevin Lunney, who was abducted and beaten by a masked gang. Photograph: Brian Lawless/PA Wire

A further search is underway in Co Cavan in connection with the abduction and assault of Fermanagh businessman Kevin Lunney.

Mr Lunney, a senior executive with Quinn Industrial Holdings (QIH) in Derrylin, was snatched from his car as he returned home on Tuesday and brutally beaten before being dumped by the side of the road in Cornafean, Co Cavan.

Local gardaí are being assisted by the Cavan Monaghan Divisional Search unit and the Garda Technical Bureau.

It follows searches which were carried out by gardaí across Co Cavan on Friday. No arrests have been made.

Extra gardaí, including armed officers, have been deployed and three Armed Support Unit teams have been sent to the Border.

At Mass in Derrylin on Sunday, the parish priest, Father Gerard Alwill, appealed to those responsible to “stop the violence now”.

“In the name of God,” he said, “stop before somebody gets killed.”

Prayers were also offered for all those in the community who felt “worried and afraid”, and for those “who may be able to do something to bring an end to this situation.”

Speaking from the pulpit, Fr Alwill said that the “barbaric” attack on Mr Lunney was “totally abhorrent” to all decent people.

“To plan and to carry out such a savage attack is totally contrary to the teachings of Jesus Christ,” he said.

“To plan and carry out such a savage attack runs totally contrary to every sinew of human decency that is within us.

“I, as an individual, and we as a community, are both horrified and disgusted by the brutality of this attack and by the sheer heartlessness that could inflict such suffering on the wife, the children and the wider family of the individual concerned,” said Fr Alwill.

He said that while people had a right to hold different opinions, “nobody, nobody, has the right to inflict such an appalling and vicious onslaught on any man or woman, or on any family. In Christian eyes, there can be no justification whatsoever for such actions.

“Over the last few days,” he said, “I’ve sensed a growing feeling of anger, resentment and revulsion among the members of our community over what has happened.

“Many feel helpless and afraid, with no one to speak on their behalf.

“All I can do, as your parish priest, is to give voice to those emotions, and to say, on your behalf, that there can be no room for such violence in a Christian community such as ours.

“In the name of God, and in the name of our community, we ask these people to stop the violence now,” he said.