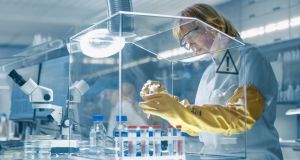 The European Centre for Disease Prevention and Control had issued an alert about 230 suspected cases of a new paediatric inflammatory multisystem syndrome linked to Covid-19. Photograph: iStock

Seven children in the State have been investigated for a “very rare” Kawasaki-like syndrome potentially linked to Covid-19, Dr Tony Holohan has said.

The chief medical officer said there were seven children who had exhibited similar symptoms in the State, and the HSE will be raising awareness of it in the community.

He said the cases were over a period of time and to call them suspect would be “stretching things”, they were rather instances where medics considered it as a possible diagnosis.

Dr Holohan said it was a “very rare” condition, with an incidence rate of about 15 for every 100,000 children. He said said his advice was directed principally at clinicians, not parents.

“This is about considering when other conditions that might explain these symptoms have been ruled out to consider this possibility.

“We want clinicians to be more suspicious that this could be, in an unusual set of circumstances with a sick child, a possible explanation.”

He stressed that the condition is “rare, unusual and there is no certainty at this point in time that there is direct link with Covid-19”.

Dr Holohan raised the issue at a briefing by the National Public Health Emergency Team (NPHET) on Friday night which confirmed the deaths of a further 16 people from Covid-19 in the State, bringing the total to 1,518.

The total number of confirmed cases is 23,956 following the announcement of another 129 cases.

There have been a further five deaths of patients with Covid-19 in Northern Ireland.

HSE national clinical advisor Dr Siobhán Kennelly said parents should look out for something that is “atypical and unexplained”.

She said Kawasaki syndrome is part of the range of diagnostic possibilities being examined in the seven children under observation at present. She listed the symptoms as being a high temperature and being off-colour, and the illness can be treated with anti-inflammatories.

Dr Holohan said the NPHET will next week look at ways of helping children because “the burden on them has been particularly challenging and difficult”.

However, he envisaged that schools will not return before the start of the new school year in September.

At the Cabinet meeting, Minister of State for Disability Issues Finian McGrath raised the issue of school reopenings and asked that those playing golf – allowed during phase one – be allowed travel further than the current 5km limit do to so.

Minister for Culture Josepha Madigan argued for museums and galleries to reopen earlier than the original July 20th date – phase four of the Government’s roadmap.

Taoiseach Leo Varadkar is said to have indicated this may be possible, if requirements such as social distancing could be met. Ms Madigan also asked for hairdressers to open earlier than July 20th.