The Irish Times view on lockdown in North: Pragmatism wins out

Largely rhetorical arguments about British versus Irish alignment have receded 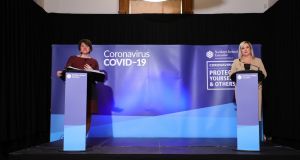 Like the Republic, Northern Ireland will take its “very tentative first steps” out of lockdown on Monday. With First Minister Arlene Foster reporting the North’s infection (R) rate to have dropped below 0.7, the Northern Ireland Executive has agreed to allow garden and recycling centres to reopen first. More will follow slowly.

The dates at which stages will come into play will depend on scientific evidence and the progress on the ground in each jurisdiction. So there may be divergences but they are unlikely to compromise significantly the plans in the other. That should ease fears expressed in particular by Dr Gabriel Scally who has been insisting on the necessity of an all-Ireland approach. He has especially welcomed a joint agreement by the Executive to ramp up testing and contact tracing, a key difference between British and Irish approaches. It is “a very welcome and strong commitment to find cases, test contacts and isolate . . . The sooner it happens the better,” he tweeted two days ago.

The Executive’s new harmony on the approach to the pandemic is welcome, a “truce”, some have called it, between Sinn Féin and the DUP that may bode well for other issues and devolution. Largely rhetorical arguments about British versus Irish alignment have receded in the face of a pragmatic Northern Ireland approach based on broad London guidelines, an independent timeframe, and a de facto gradual convergence with and close consultation with Dublin.

Although businesses may be itching to reopen, the North’s political dynamic will ensure that the process hastens slowly. Asked for a timeframe, Foster said she saw the final phase being reached in December – four months behind the South.