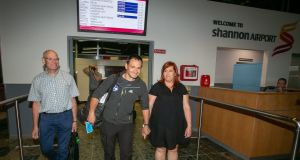 Ennis-based diver Jim Warny arrives back at Shannon Airport. With him are his father, Rene, and fiance, Asia Mania. Photograph: Arthur Ellis. 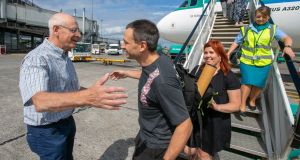 Ennis-based diver Jim Warny is greeted by his dad, Rene Warny, after he landed in Shannon Airport. Photograph: Arthur Ellis.

The Ennis-based cave diver who took part in the rescue of 12 Thai boys and their soccer coach today said it was an “amazing miracle” the boys were rescued.

At Shannon airport this morning, Belgian national Jim Warny received a hero’s welcome as a crowd of some 100 people applauded and cheered as he came through the doors at the arrivals hall.

Flanked by his proud fiance, Asia Mania, and his father, Rene, Mr Warny told reporters: “we really didn’t expect that there would be such a good outcome.”

He said: “It is a truly amazing miracle that through all of those people [involved in the rescue] that those boys got to go home to their families”.

However, he said it was “bittersweet” that Saman Gunan, a former member of the Thai navy Seals, “didn’t make it”.

Mr Gunan (38) died after he lost consciousness while placing spare air tanks along the route to the cavern where the boys were trapped.

Mr Warny said that “the true heroes of the operation are those boys who endured way more than us”.

Mr Warny was at the ‘front end’ of the rescue with a group of English cave divers and confirmed he carried out some of the boys trapped in the cave.

He said that conditions in the cave were difficult “because of the added responsibility of having a human life attached to you”.

Mr Warny got the request for help last Friday and he said, after discussing the call with his fiance and family, he flew out on Saturday morning.

“It was a huge operation. It was a rescue with many teams involved from all over the world. The Thai people were heavily invested in it - they are such a nice and friendly nation.”

Commenting on the difficult conditions inside the Tham Luang Nang Non cave, Mr Warny said: “Luckily enough, our particular team is well used to those conditions through our hobby; that is what we do.

“They are able to manage the risk and the stress and able to perform at the front end of the rescue.”

He said that inside the cave “conditions were certainly harsh. Visibility in the water was quite bad. A lot of parts of the cave weren’t flooded, you were diving, walking, swimming, waving.

“It was a very dynamic environment to move through - that is why it required a lot of teams in the earlier sections of the cave and our own team to hand over the boys.”

Mr Warny said he did not feel his life was at risk at any stage of the rescue. “Cave diving and caving is something I do on a weekly basis. It is a highly dangerous activity. That is why we train.

“We are at it for so many years, and we are able to manage the risk and the stress and on top of it to bring those boys out which was not an easy feat.”

Describing his emotions when the first boys were taken out of the cave, Mr Varny said: “It was a huge feeling, the whole team working together. There were a lot of happy faces around.”

He added: “We were focused right until the end - until the final people were taken out of the cave, and then everyone was very happy.”

Asked was he apprehensive about the rescue, Mr Warny said: “I knew the job I had to do and I focused on the task at hand.”

He said that it took a while to formulate a rescue plan “and once we had a plan it moved quickly out of necessity”.

Mr Warny said he is very happy to be home with friends and family. He said: “I can only imagine how worried they were - I was worried too.”