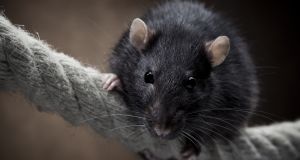 Exterminating black rats on tropical islands is the best way to help coral reefs, a team of scientists has concluded. Photograph: iStock

Exterminating black rats on tropical islands is the best way to help coral reefs, including their fish, an international team of scientists has established.

Exterminating the rats should therefore be an urgent conservation priority, they recommend.

The scientists studied tropical ecosystems in remote islands in the Indian Ocean to find out how rats impact on surrounding reefs. They compared islands with and without rats.

Their results – published as lead paper in the latest issue of journal Nature – confirmed rats decimate seabirds, but also damage the ecology of the coral reefs that encircle and protect the islands.

“Rats on islands decrease fish life and coral reef health,” paper author Dr Nicholas Graham told the EuroScience Open Forum in Toulouse. The study was carried out at the Chagos Archipelago in the Indian Ocean.

The islands were a perfect “laboratory” setting as some are rat-free, while others are infested with black rats - thought to have been introduced in the late 1700s and early 1800s.

When you step onto a rat-free island, the skies are full of birds, it is noisy and it smells, since their guano is so pungent, said Dr Graham. Islands with rats are far quieter, with almost no seabirds: the rodents eat seabird eggs, chicks and sometimes adult birds.

“The difference is like chalk and cheese, with thousands of seabirds per hectare [on rat-free islands] and next to no seabirds where there are rats,” said Dr Graham. The lack of birds was expected. What was more surprising was the dramatic impact their droppings had on adjacent coral reefs.

The birds fed far out at sea, roosted on the islands and fertilised them with rich fishy droppings, with a good balance of nitrogen and phosphorous. These nutrients flow out to sea and benefit the coral reef fish.

Most coral systems around the world are under immense pressure due to global warming.

The size of this fertilising effect surprised the scientists, he said. Fish around islands with no rats grew faster and were more plentiful. The coral reefs around “birdy islands” had around 50 per cent more fish biomass than those around “ratty islands”.

“There is no example as clear cut and effective in enhancing coral reefs in the face of climate change. This is the low hanging fruit,” he said.

“We knew seabirds had a big influence on islands, but didn’t know if they influenced coral reefs. Just how much a boost in productivity is going on was quite surprising,” said Dr Graham. He stressed that “the birdy islands” is how islands should look.

Unfortunately, 90 per cent of the world’s islands have been decimated by invasive species like rats, mice and cats. It is possible to turn this around.

Rat eradication has been completed on 580 islands worldwide. This is usually done by dropping poison from the air.

Many islands around Ireland and the UK have rats. These might benefit from “de-ratting,” Dr Graham said, but afterwards the docking of boats on the island would have to be carefully controlled so the rats do not return.

1 Blanchardstown, Tallaght top table for highest Covid-19 rates
2 The far right rises: Its growth as a political force in Ireland
3 Coronavirus: Public health experts considered moving Dublin to Level 4
4 Life in Level 3: What will happen under new restrictions in Dublin?
5 President Higgins says British must face up to their history of reprisals
Real news has value SUBSCRIBE