There was a standing ovation in the Seanad as the upper house voted in support of a Bill banning the importation to Ireland of Israeli goods produced in Palestine. Video: Oireachtas TV 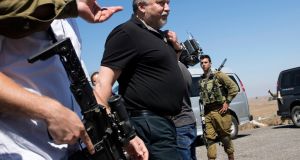 Israel’s defence minister has called on his country to close its embassy in Dublin in response to the Seanad backing a Bill banning the import of goods from West Bank Jewish settlements.

Ireland’s Ambassador to Israel, Alison Kelly, was yesterday summoned to the country’s foreign ministry to be told of its displeasure over the progress of the Control of Economic Activity (Occupied Territories) Bill 2018.

Ministry spokesman Emmanuel Nahshon said, “The Irish Senate has lent a hand to a populist, dangerous and extreme anti-Israel boycott initiative, effectively undermining the dialogue between Israel and the Palestinians.

“The boycott will affect the livelihood of many Palestinians who work in Israeli industrial zones, and they will be hurt by this initiative,” he added. “It will only cause damage to the diplomatic process in the Middle East.”

However, defence minister Avigdor Lieberman said greater retaliation than inviting the Ambassador in “for a reprimand” was needed.

“With Israel haters there is nothing to debate. Israel should immediately close the embassy in Dublin. We will not turn the other cheek to those who boycott us,” Mr Lieberman said.

The Bill, proposed by Independent Senator Frances Black, would make it an offence to purchase goods and services from Israeli settlements which have been condemned by Ireland and the EU as illegal.

It passed its first vote in the Seanad on Wednesday with the support of Fianna Fáil, Sinn Féin, Labour and Independent Senators. It must pass through the Dáil before becoming law but if backed again by the same coalition of parties and Independents, it would have sufficient support.

Ms Kelly had already been summoned to the foreign ministry twice this year. In January, when the Bill was first submitted, she told the Israelis that the legislation was not motivated by the BDS (Boycott, Divestment, Sanctions) movement.

She was also summoned to the foreign ministry in April to be reprimanded over then lord mayor of Dublin Mícheál Mac Donncha’s participation in a symposium held in the West Bank city of Ramallah, and over two anti-Israel resolutions passed by Dublin City Council.

Speaking yesterday, Ms Kelly said: “One of the points I always make to the Israelis is that I represent the Government and the Government opposed the Bill in January and it opposed it today.” She said he also raised other issues of concern for Ireland, such as the situation in Gaza and Israeli home demolitions in the West Bank.

Senior Palestine Liberation Organisation official Saeb Erekat welcomed the vote. “This courageous step builds on the historic ties between Ireland and Palestine, as well as it shows the way forward for the rest of the European Union. ”

“The settlements are a war crime and must be treated as such,” they said.

Number targeted by violent theft has trebled in past four years 13:55
NI pair will not face prosecution for German backpacker’s murder 13:51
ESB found negligent over flood damage to UCC buildings 13:45
Martin and McDonald clash over Debenhams liquidation 13:44
Varadkar: jobs stimulus plan will be ‘radical and far-reaching’ 14:02