Ireland well-served by presidents with a record of public service, says Mansergh 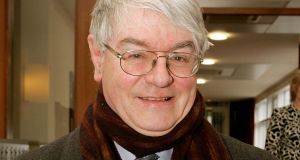 Martin Mansergh: said the diverse range of presidential candidates seeking a nomination showed the criteria were ‘neither too liberal nor too restrictive’.

Ireland has been well-served over the years by a succession of presidents with a record of distinguished public service to the State, historian and former Fianna Fáil TD Dr Martin Mansergh has said.

Dr Mansergh said when Éamon de Valera unveiled the 1937 Constitution, many opposition figures feared he intended to turn himself into a presidential dictator along the lines of what was then happening in continental Europe.

“The outcome has been quite different and the office of president has come that of a unifying figure with an ability to inspire, while acting as a guarantor of the official order,” Dr Mansergh said in an address to the Daniel O’Connell Summer School in Cahersiveen, Co Kerry over the weekend.

Among those seeking nominations to join President Michael D Higgins on the ballot paper for October’s presidential election are a number of businessmen, a journalist, a senator, an artist, a musician and a Marilyn Monroe impersonator.

“The function in other countries is mainly filled by person who have given distinguished public service and so far, that has been the pattern here as well with high standards consistently upheld,” Dr Mansergh said.

The diverse range of candidates seeking a nomination showed that the criteria were “neither too liberal nor too restrictive”, he added.

Turning to other elements of the Constitution, Dr Mansergh said that undoubtedly its greatest weakness was Article 41.2 which recognises women’s special place in the home and which looks set to be the subject of a referendum on the same day as the presidential election.

“The biggest weakness of the Constitution was the way this seemingly innocuous clause underpinned with full clerical support, the dilution and restriction of women’s rights ... (it) has long been an anachronism and should have been changed far earlier,” he said.

Dr Mansergh said the 1937 Constitution is both renewable and reformable but that “a new constitution, certainly this side of a united Ireland, is neither practicable nor desirable as so much case law has built up” on foot of it.

“Apart from certain shortcomings, it has provided or contributed to the progress, stability and security of this State, giving us a national life of our own as well as a place among the nations,” he concluded.

Earlier, Prof John Coakley of the School of History, Anthropology, Philosophy and Politics at Queens University Belfast cautioned that too much should not be read into changing demographics which have seen the ratio between Protestants and Catholics in Northern Ireland reach a near balance.

“Too much should not be read into these changes as far as Northern Ireland’s future constitutional status is concerned however,” said Prof Coakley who acknowledged that the demographic changes had led to near political and electoral parity between unionists and nationalists.

“Opinion polls continue to show rock solid Protestant support for the Union but a much more fragmented position among Catholics, about half of whom have indicated their preference for the union over Irish unity in the past ten years.”

“It is likely however that much pro-union support is instrumental, fragile and open to being dislodged by other geopolitical changes -in particular Brexit may encourage many ‘soft’ supporters of the union to consider their position and see advantages in Irish unity.”

Prof Coakley said the Good Friday Agreement was likely to come under pressure from Brexit with its liberal arrangements for citizenship rights in Northern Ireland and the existing operation of the common travel area with the intensity of threat depended on the ultimate nature of the Brexit deal.

“The Good Friday Agreement however also offers a potentially power line of defence against the more damaging aspects of Brexit with their implications for the maintenance of the peace that the Agreement was so instrumental in consolidating,” he said

Prof Coakley said that while the Good Friday Agreement’s status as UN registered international treaty may give it symbolic value, its greater value may lie in its status as “an iconic peace deal in late 20th century Europe” which may endow it with sufficient status not just to survive Brexit but even to help shape the Brexit process.