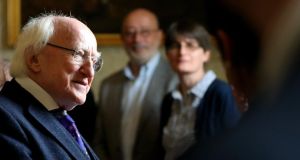 Clifden Arts Festival: President Michael D Higgins said young people who discover they have a talent can still expect this to be “welcomed and celebrated”

President Michael D Higgins has said that Irish society stands out in an increasingly globalised world in valuing the “work of the imagination”.

Young people who discover they have a talent can still have a reasonable expectation that this will be “welcomed and celebrated”, Mr Higgins said at the opening of the 40th annual Clifden Arts Festival, in Co Galway.

“Something very important has been happening in Ireland at the moment: we have never had so many poets, painters and sculptors, dancers, writers and playwrights, film-makers, actors, musicians, artists in new media at work here, artists of the highest calibre,” Mr Higgins said.

Irish society’s appreciation of the value of the imagination was exemplified by the festival’s work in “situating the arts as a glorious element in a living community”. The longest-running community festival of its type had built a “meitheal between artist and audience”, he said.

The work of the mathematician, writer and artist Tim Robinson was highlighted by Prof Gearóid Ó Tuathaigh earlier on Wednesday, when he opened an exhibition of abstracts as part of the festival programme.

The series of paintings, displayed courtesy of the Irish Museum of Modern Art, reflect his wider work, which “defies all binding definition”, Prof Ó Tuathaigh said. He referred to the “rich ‘geophany’ of the Atlantic landscape into which Mr Robinson had folded himself” and the “natural and cultural riches he has made accessible to thousands of grateful readers”.

Mr Robinson seeks to “release the full acoustic of the living landscapes of Aran, the Burren and Connemara, in rich text and meticulously fine cartography”, while his “thick description of place” carries its “scholarship elegantly”, he said.

“It is appropriate that here in Clifden, in the heart of Connemara, we should gather this autumn evening to salute Tim Robinson’s genius and to thank him heartily for sharing so generously his exceptional gifts, not least among his long-time ‘neighbours’ in the west,” Prof Ó Tuathaigh said.

Footsbarn and Fishamble theatre companies, the comedian Kevin McAleer, the groups musicians Dordán and Stockton’s Wing, the RTÉ Contempo Quartet and Concert Orchestra with James Galway, and a plethora of poets and writers, including Paul Durcan, Vona Groarke and Michael Longley, are among other participants at the 10-day festival, which runs until September 24th.